Above: Kunal Sarkar, CEO of Lumosity

Speaking to VentureBeat, Lumosity chief executive Kunal Sarkar disclosed that the web site of the mental fitness program saw almost 9 million unique visitors in January 2012 (including users of the company’s mobile apps). Since starting Lumosity.com in 2007, user numbers have roughly doubled every 10 months. Brain games are a big trend these days as companies try to combat diseases such as Alzheimer’s by combining fun with improved mental health.

“Brain games” have been a casual games staple since Nintendo popularized the genre with its 2006 DS cartridge Brain Age, a puzzle game collection inspired by the work of Japanese neuroscientist Ryuta Kawashima. But Nintendo never claimed that the Brain Age games have been scientifically validated.

Lumosity takes its brain training more seriously. The company offers a series of online courses that help users improve core mental abilities. They include over 35 mini-games that are entertaining enough to quickly hook new users. The design is driven by academic research and each game is an exercise to improve specific areas such as problem solving, memory training or quantitative reasoning. Some courses are designed for medical conditions such as Traumatic Brain Injury. As users become proficient in a game, it is automatically adjusted to increase in difficulty in order to continue to stimulate brain development through ongoing challenge.

One of Lumosity’s three founders is neuroscientist Michael Scanlon who oversees the company’s Human Cognition Project. Its goal is to establish Lumosity among researchers as a platform for learning about cognitive enhancement and brain performance, with results helping to improve the online brain exercises.

Over 190 researchers are currently conducting research on Lumosity, which has already collected 320 million data points across its 20 million users. This results in independent articles such as the finding of the University of New South Wales in Australia that Lumosity can improve attention in older adults with mild cognitive impairment. 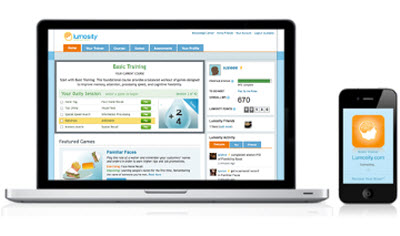 Sarkar believes this “ecosystem of researchers” adds to Lumosity’s scientific core competency and sets the service apart from competitors such as Posit Science, Cognifit and Fitbrains. Credibility in the academic world is an important asset since the benefits of brain game exercises are still being scientifically debated.

Lumosity just launched its first TV advertising campaign on several cable networks. Due to the broad appeal of the idea of becoming smarter through training, and a growing general awareness of the concept, Sarkar is optimistic about future growth: “Consumers are increasingly interested in brain fitness, whether it’s to be sharper, remember more, or to perform better at work, school or everyday life”. He also sees potential for localized versions of the service although it’s not currently a focus of the company. About half of the visitors to Lumosity.com are already from outside of the United States.

Signing up for Lumosity.com is free, but after three days of the individualized training plan developed upon registration, a subscription is required to continue. Single months cost $14.95 and a full year commitment brings the monthly fee down to $6.70. Subscriptions are Lumosity’s only revenue source, the website is free of advertising.

Sarkar did not want to reveal how many of his 20 million users are actually paying subscribers. He believes that customers are fine with the pricing once they understand the science and the benefits of the program as they’re not paying for self-indulgence (as in ‘playing games’) but rather for self-improvement, similar to going to the gym.

Lumosity has more than 50 employees and was founded in 2005. It launched its website in 2007. Total funding to date is $36 million with investments by Menlo Ventures, FirstMark Capital, Harrison Metal and Norwest Venture Partners.