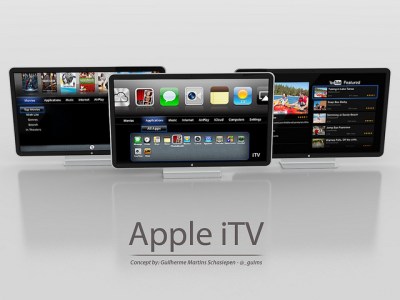 New rumors of the much-anticipated Apple-branded television set (a.k.a. iTV) have surfaced regarding launch partnerships with major telecom companies as well as the device’s user controls.

Apple has allegedly entered into discussions with Canada’s Rogers Communications and Bell Canada on an iTV launch because the companies are involved in both wireless and broadband markets, according to large Canadian newspaper The Globe and Mail, which cites unnamed sources familiar with the matter.

Additionally, Rogers and Bell already have prototype Apple iTVs at their respective headquarters. This isn’t the first time we’ve heard something about a prototype device. Previously, it was semi-confirmed by USA Today that Apple SVP of Industrial Design Jonathan Ives had a 50-inch iTV prototype in his office.

In terms of remote control functionality, The Globe and Mail report indicates that users will be able to navigate through the iTV’s user interface using Apple’s voice control feature Siri or with motion-control gestures similar to Microsoft’s Xbox Kinect functionality. These controls allow users to access an on-screen keyboard to switch between media content, surf the web, conduct video chats, and communicate through social networks.

While news about the iTV’s hardware and software is nice, the biggest factor in an Apple-branded television set has to do with what kind of content it offers consumers. Last week, Piper Jaffray analyst Gene Munster outlined three possible content scenarios for Apple’s iTV strategy, as VentureBeat previously reported.