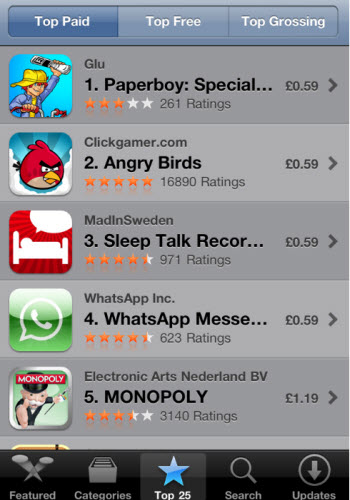 In a sign of trouble at the App Store, Apple has warned app developers not to manipulate their rankings in the top charts by using third-party marketing services.

The warning addresses rumors that “bot farms” or “water armies” in places such as China are offering to boost apps into the top 25 by using a mob of users to download an app and give it positive reviews in exchange for money.

In a message on its developer page, Apple said, “Once you build a great app, you want everyone to know about it. However, when you promote your app, you should avoid using services that advertise or guarantee top placement in App Store charts. Even if you are not personally engaged in manipulating App Store chart rankings or user reviews, employing services that do so on your behalf may result in the loss of your Apple Developer Program membership.”

The message shows that Apple will have zero tolerance for companies that use such services. But Apple, in its usual cryptic way, didn’t say who some of these third-party marketing services are. Some companies, including Tapjoy, got into hot water last year after pushing marketing services that Apple felt were manipulative. However, Tapjoy wasn’t doing anything like what some of the others are accused of doing.

The issue of manipulating rankings came up lately after an anonymous developer revealed that an unnamed company had been offering studios a spot in the App Store’s top 25 rankings for $5,000.