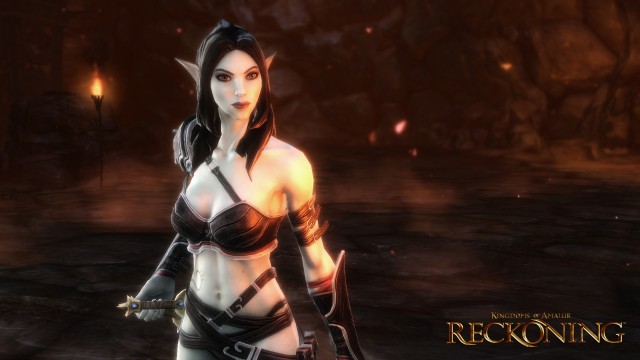 Lockpicking
Lockpicking should be nothing new to gamers, and especially not if you’ve played Skyrim. The lockpicking mini-game in Kingdoms of Amalur is quite similar, with one exception: it’s ridiculously easy. Even with a mere two points in Lockpicking, I never had any trouble opening hundreds of chests throughout the game, including Very Hard ones.

There are essentially five quadrants you can try when Lockpicking: far left, slight left, center, slight right, and far right. Place the lockpick in one position and then see if the slider will go. If the slider reaches the other side, walla, the chest will open. If you get some resistance or the lockpick breaks, you need to move to a different quadrant and try again.

85% of the time, just putting the lockpick slightly to the left of the starting position opened every treasure chest I came across. Quite a few times, not moving the lockpick at all was the solution, and whenever either of those didn’t work, it only took me a maximum of two lockpicks to feel out the lock.

It’s like playing hot/cold. If you immediately get resistance, the lockpick is far away from the right spot. If you get a little resistance after the slider has almost reached the other side of the mechanism, you’re very close. I can’t explain it much more beyond that, but you’ll be able to figure out pretty quickly for yourself.

The bottomline is, there’s no need to invest precious skill points in Lockpicking. Just make sure you have a lot of lockpicks (they’re cheap!) and save before any Hard/Very Hard chests, and you should be able to open anything.

Mercantile
The Mercantile skill allows you to buy items at shops for less, and sell items to shops for more. I recommend prioritizing this skill, as you’ll be hurting for money early on, especially if you do any training.

The longer you play, the more you’ll find tons and tons of loot that you don’t need or want, and you’ll eventually have amassed a small fortune. I ended up with $2,000,000 of expendable cash by the end of the main storyline. At that point you can re-spec your skill points into a different skill altogether.

Note: Some merchants will give even better rates if you do a quest for them. A perfect example is in the first town you come across, Gorhart. The shop owner of Golden Age Alchemy requires a little bit of help, and once you complete her quest she will be an excellent source to unload all your items to throughout the entire game. In fact, every time I headed to Ysa for my divine blessings, I’d make a stop at Gorhart to sell my unwanted inventory. There’s probably a shop owner in Ysa that I could have done a quest for, but I don’t like helping people.

Persuasion
While persuasion is very important in Kingdoms of Amalur, the Persuasion skill is not so much. I only had 3-4 points invested in Persuasion throughout the game, and most of my chances of persuading someone were 80% or higher.

So long as you save before any persuasion attempts, you’ll never really need to invest a lot into this skill. It may take a few reloads, but even with a 10% chance of success, you’ll eventually persuade the person you’re talking to.

Sagecraft
Sagecraft is the third crafting skill, and allows you to merge shards together to create gems and socket them into certain weapons and armor. Unlike Blacksmithing, Sagecraft can actually be quite useful, as gems permanently add notable bonuses to your equipment. I only changed my entire equipment setup three times in 30 hours, so you’d get getting good mileage out of any socketed gems. And, if you decide to upgrade your gear, you can unsocket the gems to use again (at the cost of destroying whatever they were originally set in).

However, like Blacksmithing, I would suggest re-specing points into the Sagecraft skill only when you’re about to sit down and craft a lot of gems. Sagecraft potions can help too if you don’t have enough points. That way you don’t have to waste any points in a skill that you’re only going to use once every several hours.

Eventually, when you have points to spare, I would consider building up Sagecraft (before Blacksmithing but after Alchemy) since it will lead to more frequent and higher quality shard drops.

Stealth
Stealth didn’t strike me as a viable option in Kingdoms of Amalur: Reckoning the same way it did in Skyrim. There’s not really a lot to steal, and most of the time it’s just crappy books anyway. There’s not a lot of sneaking required. Plus most of the time it’s just easier (and faster) to run head-long into battle and merc everyone, since the game is not difficult at all.

Suffice it to say, I didn’t use stealth much, and you can still do assassinations (instant stealth kills from behind) with a single point in the Finesse ability tree. Your playstyle may vary, but this is yet another skill you might want to avoid wasting points on.

Thanks for reading our game guide, hope it helped! If you like what you see, check out our other recent tips and tricks: