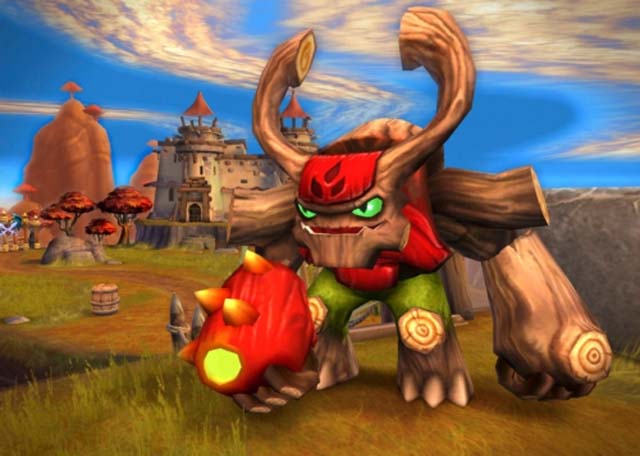 By any account, Skylanders was a massive bet on a new entertainment property that combined technology innovation, toys, and video games in a creative way. It turned out to be the biggest bet that Activision made in the video game business last year on a brand new property.

“Skylanders Spyro’s Adventure’s success in 2011 validated an exciting idea — that with the right technology, and the creative minds to support it with engaging characters and story, we could define a new model for children’s play,” said Activision CEO Eric Hirshberg.

Skylanders Giants will mark the evolution of this core concept, Hirshberg says. It will feature eight new collectible figurines that will be twice the size of the original Skylanders, both physically and virtually. Some of them will include a new integrated light technology that will cause them to light up when near or on the game’s “Portal of Power” peripheral. The latest installment of the franchise will also feature an all-new story-driven adventure and advanced integration across console, handheld, mobile, and online.

Fans of Spyro’s Adventure will also be happy to know that their characters will be 100 percent compatible with Giants and will keep their leveled-up stats and customizations.

Retailer Toys”R”Us says it will continue to support the Skylanders franchise with a comprehensive, global marketing program. “While it was still in development, we recognized the potential that Skylanders had to connect with our customers due to its unique merging of physical and digital play,” said  Toys”R”Us Chairman and CEO Jerry Storch. “The game was an enormous success last holiday shopping season, and the toys seem to evaporate as soon as they arrive on our store shelves.”

Skylanders Giants is being developed by Toys For Bob, an Activision studio located in Novato, California. Toys For Bob previously spent 2.5 years toiling on a brand new cross-platform video game that married the world of collectible toys with video games through a unique wireless technology that beams data back and forth between the toy and the game.

The idea of melding toys and video games wasn’t new. Toy companies created titles such as U.B. Funkeys that also came with toys. But doing a good job with a very ambitious game is rare. And tying together the products in the way that Activision Blizzard has done is unprecedented. Toys For Bob was able to move forward only because it knew that it could handle the task of making a high-quality video game.

As the idea moved up the executive chain, it became bigger and bigger. Toys For Bob built up its team for the Wii game to more than 100 developers. Another 100 developers from other Activision Blizzard studios also helped out. Vicarious Visions made the Nintendo 3DS version and Frima built the web, iPad, and iPhone versions.