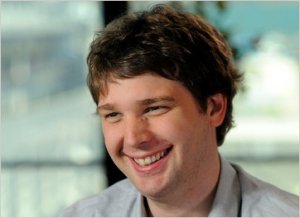 There were a lot of doubters who said Groupon was nothing more than a Ponzi scheme looking to cash out with an IPO. Groupon just reported its first quarterly earnings as a public company, and did better than many on Wall Street expected. Yet the stock is taking a beating, dropping 15 percent after hours trading.

The daily-deals company announced that revenue and active customers were way up on a year-over-year basis. The company said it was in the black for the first time, swinging from a $336.1 million loss to an operating income of $15 million. Reuters points out, however, that Groupon reported a quarterly net loss of $42.7 million, in large part due to high overseas taxes.

Again, there is a disparity between what Groupon is saying (hey look, we’ve gone from a loss to some operating income) and the reality of the situation (they reported a net loss while Wall Street was hoping for a small profit).

Marketing is a hot button for the company. Marketing expenses are down $28.7 million, with active users up 33 percent. Mason says the company is investing more in “transactional marketing,” which focuses on purchases, rather than just customer acquisition. He believes this has the ability to bring down the company’s marketing costs even more. Mason also explained that he sees “Groupon Now” customers becoming more loyal, and are more likely to become repeat customers. And, for the merchants, nine out of 10 customers spend more than the value of the Groupon itself.

Groupon is also particularly interested in continuing to make advances in its technology. The company has an “initiative” it has yet to announce, which will deal with expanding its technology. Recently, Groupon acquired Adku, an e-commerce promotional vehicle, which provides “suggested items” to customers. This technology alone is a boost to Groupon’s existing portfolio.

Check out their numbers below: