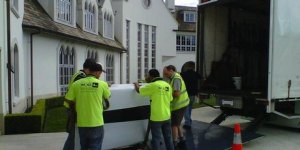 Government officials have Megaupload founder and accused money-launderer Kim Dotcom right where they want him — locked up in New Zealand awaiting an extradition hearing — but that’s not stopping them from kicking the Internet mogul while he’s down.

New Zealand authorities seized Dotcom’s $4.3 million Coatesville home today, according to The New Zealand Herald. The property, not previously seized in a January raid that took $16 million in assets, is currently occupied by the alleged crime-ring leader’s pregnant (with twins, no less) wife and three children.

Dotcom faces up to 20 years in prison for the supposed criminal activities of his file-sharing service Megaupload. Charges include conspiracy to commit racketeering, copyright infringement, and money laundering. The maligned kingpin continues to insist on his innocence but was recently denied bail in a New Zealand court and deemed a flight risk.

The home seized Wednesday is not the extravagant $30 million residence Dotcom was leasing at the time of his arrest.

The silver lining, if there is one, is that Dotcom’s family will not be evicted from the seized residence. “We’ll set up a property inspections to make sure there’s no damage, but other than that, the family can still enjoy it,” Official Assignee Guy Sayers told The New Zealand Herald.