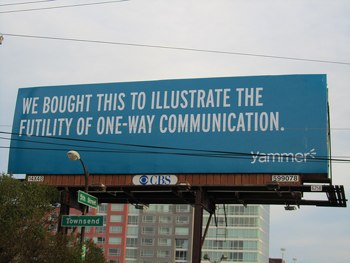 Rumors are circulating that enterprise-focused social network Yammer is raising a new mega funding round of more than $50 million, which would push the startup’s valuation near $1 billion.

Yammer provides companies with their own private social network that employees use to quickly communicate and update their activity throughout the day. A company’s Yammer network is closed off from public view and is only accessible to people who have a company-branded email address. Over 200,000 businesses are now using Yammer’s social service, including 7-Eleven, Red Robin, Ford, General Electric, Shell, Penn State University, and even VentureBeat.

The new round, which allegedly came together in the last two days, attracted over $100 million from interested investors, but Yammer may have settled on half that amount, according a PandoDaily report that cites sources familiar with the deal.

Yammer declined to comment about the funding news to VentureBeat, while stating that it had “no news to share at this time.”

However, there are several reasons why news about the new round might be true. First and most notable is the company’s year-over-year success. The startup claims to having more than doubled its total user growth to 4 million (compared to 1.6 million in 2010), tripled the amount of paid users to 800,000 (compared to 300,000 in 2010), and tripled the number of people employed from to 250 (compared to 80 in 2010). And speaking of hiring, Yammer has added some very notable executives to its team, including former Salesforce Vice President of Sales David Obrand.