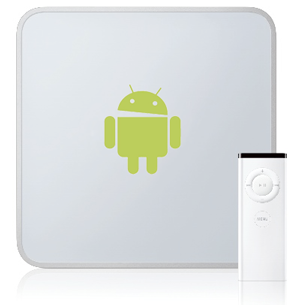 Google is allegedly working on creating a company-branded entertainment device capable of streaming music in multiple locations throughout a person’s home.

The information about the Google-branded device comes from a Wall Street Journal report that cites unnamed people briefed on the project. If true, it would mark the Google’s first attempt at creating a hardware product without the aid of an electronics manufacturing partner. The search giant has historically concentrated its resources on developing web-based services, and more recently its open-source Android operating system software for mobile and streaming media devices.

The report indicates that the device is being developed by Google’s Android department, which has previously worked with consumer electronics companies HTC and Samsung on a Google-branded smartphone running a “pure” version of the Android OS. The report also states that the device would allow people to make purchases through the Android Market, which may not be restricted to just music—meaning video, podcasts, etc.

In addition to the word-of-mouth rumors, there are several reasons to believe Google is indeed developing its own streaming device. Last week, an FCC application from Google was unearthed requesting permission to use an undisclosed new “entertainment device” in four major cities over the next six months. As I previously theorized, the data transfer process for the device described in the application would probably allow people to grab video or audio content from the Internet and then distribute it to all their other mobile devices or set-top boxes using Bluetooth technology. The benefit of this would be that people aren’t exhausting their overall network or racking up expensive data charges from wireless carriers.

Also, The timing of the news coincides with Google nearing approval from federal regulators on its acquisition of prominent consumer electronics company Motorola Mobility.