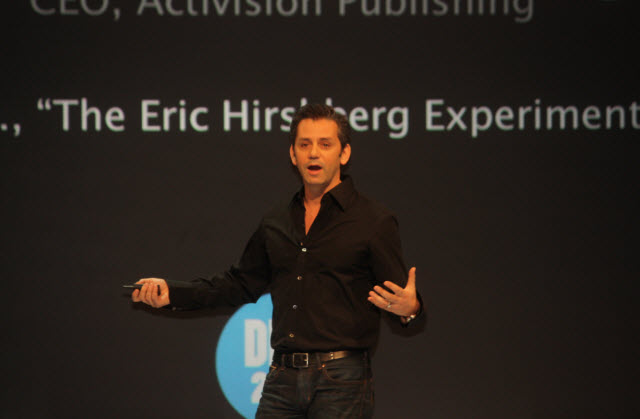 Eric Hirshberg was an experiment when Activision Blizzard‘s chief executive hired Hirshberg as CEO of the Activision Publishing division about 18 months ago. Hirshberg was an art-school graduate who rose through the ranks of the creative side of advertising and eventually became CEO of billion-dollar ad agency Deutsch LA. Most video game CEOs rise through the ranks of finance or game development. But Hirshberg was a lot more comfortable with a paint brush in his hands than a spreadsheet. But under Hirshberg, Activision Publishing has launched some of its most successful games in history, including Call of Duty: Black Ops and Call of Duty: Modern Warfare 3. At the DICE Summit in Las Vegas, Hirshberg talked about the experiment of an advertising creative person rising to the top of one of the world’s biggest video game companies.

The marketing campaigns for those games helped them rise above hardcore gaming enthusiasts to mass audiences. Under the tag line, “there’s a soldier in all of us,” Black Ops commercials billed the game as one that any weekend warrior could play. The Modern Warfare 3 TV commercials promoted the  game as playable by both veterans and newcomers, or “noobs.” These ads showed that creative marketing could elevate a game to the level of a cultural phenomenon. Modern Warfare 3 generated more than $1 billion in revenue in its first 16 days on sale, and Call of Duty had 40 million monthly active users in 2011. 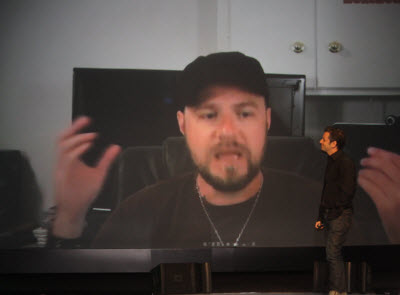 Hirshberg said that, based on his background, he believes that great video games are not products. They’re brands. While people buy products, they “buy into brands,” he said. That is what Activision was counting on when it decided to launch Call of Duty Elite, a social network for hardcore Call of Duty fans. It was an attempt to keep gamers engaged in the product year round, rather than just for a few weeks a year. The tough sell was that Activision wanted to offer a premium version of Elite for the hardcore fans. The hint of the subscription fee caused a fan revolt by bloggers such as Neils Hansen (pictured on screen), of the Gunn Shop report.

After a summer of criticism, Activision threw a fan appreciation event, Call of Duty XP, where it announced the fee for the premium version of Elite would be $4.99 a month, which was a bargain considering subscribers would get free access to content such as map packs that would ordinarily cost more than $60 a year. After that, bloggers such as Hansen decided that Elite wasn’t a “douche move” after all. Call of Duty Elite got more than 7 million subscribers, including 1.5 million who paid, making it one of the fastest-growing premium subscription services ever.

We sat down and talked with Hirshberg after his DICE talk. Here’s an edited transcript of our exclusive interview.

Gamesbeat: I didn’t quite connect all the dots in the talk. What turned around bloggers like Hansen in particular? The bloggers turned around on Elite because…?

Eric Hirshberg: What I described was, the first impression we made was during the beta. We told people who there was going to be a paid subscription part of the service, but we didn’t tell them about everything you were going to get, because we didn’t want to talk about things that we couldn’t yet show. It was a no-good-options situation. What turned them around was when we got to Call of Duty XP. We got the chance to finally show Elite and all of its features working in the game, and tell everybody what they were going to get. So once he heard the whole list, it turned him around.

GB: He seemed to latch on to the value proposition.

GB: It was as if $60 for four different content drops, or $4.99 a month, and I get the maps for less money than I would otherwise spend during the year. So the value proposition is what sold him. Everybody’s going to come around to the value of that deal at some point, right? But is there also something more that you guys accomplished there, where you convinced them to go from, say, buying one product a year, to staying with it for the whole year?

EH: Well, if you rewatch the video, he did latch on to the value proposition, but he also talked about all the other services that we’re baking into Elite. It was way beyond just what other services were offering. So yeah, I think that the value of the product and the vision of the product won people over. The story was really about how we had to make this Sophie’s Choice between doing the beta and making the best possible first impression. We couldn’t do both.

GB: I guess the experience of creating the brand and promoting the experience seems to help with this message. The task you wanted to do was convert from product-only purchases to year-round engagement, I guess?

EH: As I said, I think both Call of Duty Elite and Call of Duty XP, if looked at through a certain lens, are sort of experiments with how willing people are to enter into a real relationship with a game that they like. To think of it differently than something you buy once a year, to think of it more as something you do all year round. Or do, in the case of XP, as a sort of lifestyle piece of entertainment. So I think that both of them show a greater potential than people might assume that games have, to become those kinds of brands in people’s lives.

GB: Is this a case of the games industry hasn’t come to truly realize this yet? That games are brands, that they’re not just products?

EH: I don’t know that it’s the games industry hasn’t come to realize it so much as, it’s almost very emblematic of how all entertainment industries promote their products. But as I said in my comments, games are different, because they’re not disposable, they’re not one-time. They really are relationships. The way you interact with a game has much more in common with the way you interact with a sport that you love, or a hobby that you love, that’s ongoing and long-lasting, than with how you watch a movie. Which you do for two hours and then you move on. So I think all we’re trying to do is look at that behavior and change the way we talk to people about games.

GB: It makes sense, that (game industry) people should start thinking this way, especially if they’ve figured out what their powerful properties are. That seems to explain all of Activision’s behavior for the last few years, focusing on the brands that are really the hottest.

EH: Well, not just the hottest properties. I got a lot of questions in the run-up to Skylanders: Spyro’s Adventure about why we were choosing to enter the kids category when others were exiting it. When the strength of the Wii sales were slowing down. There were a lot of reasons that, if you just looked at them on a spreadsheet, you would think that might not be a great idea. But the magic of the idea doesn’t fit on a spreadsheet. Where Activision has chosen to make the big investments and take the big risks are the places where we feel that we have something special to contribute and something that sets our game apart. In the case of Call of Duty, I think it’s the strength of the brand itself, and the strength of the developers behind it. In the case of Skylanders it was the idea of toys coming to life. In the case of Bungie, it’s the strength of that developer. In the case of Call of Duty Elite, it was the behavior of our gamers — the fact that they were sticking around all year and buying up every piece of downloadable content (DLC) we could release. We had the resources to make a really big investment, to try something new. So we definitely have a strategy not to just compete in every category, just because we don’t compete there, but to only compete where we feel like we have something special to bring to the party.

GB: And if people buy into a brand, that becomes just more valuable, and you can extract more value from it?

EH: It’s a matter of a shift in mindset. People don’t have any problem thinking about products in other sectors this way. I don’t think anyone would say that when you buy an Apple product, you’re just buying a piece of consumer electronics. You’re also buying a little bit of the Apple belief system, an emblem of your creativity, your design aesthetic. Same with Nike shoes or different soft drinks or beers. There are all kinds of brands that have meaning beyond the product in other categories. That hasn’t been historically true of games, but I think it can be, and some of the work we’ve done on Call of Duty and some of the approaches we took on Skylanders show that.