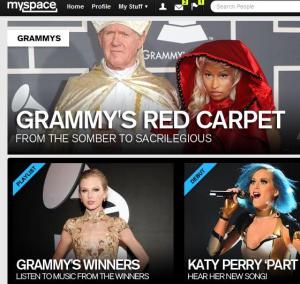 It’s alive! MySpace, once the king of the social networking space, has been bleeding users for years.  Now it’s set to report a million new users have signed up since December, says the New York Times. (Maybe new investor Justin Timberlake’s experience acting in the “The Social Network” is rubbing off on Myspace.)

The big change strategic change Myspace has made is to stop competing head to head with Facebook. Instead, it’s trying to leverage the licensing deals it already had in place with record labels and the wealth of independent music bands had uploaded to the site.

Myspace rolled out a new music player in December and worked hard to integrate this with Facebook and Twitter. New chief executive Chris Vanderhook told the NY Times that it was this partnership which really drove the new growth at MySpace.

Right now Myspace has 42 million tracks, a lot more than Spotify or Rhapsody. Of course, a ton of those tracks are unbearably bad amateur recordings made by no-name artists. But stopping by the site this morning we found a playlist featuring Grammy winners like Adele, Whitney Houston, Taylor Swift and Bruno Mars.

Turning MySpace around is no small feat. But the site is still growing slowly in comparison to services like Spotify, which is currently adding 250,000 users a day, and with which Myspace now directly competing.

What this data doesn’t tell us is how many old users are still leaving the site. 1 million new users isn’t so great if 1 million old users quit visiting.  The biggest positive indicator is that the site’s traffic has actually grown for the first time in recent memory, climbing four percent over the last month, but there’s no word yet on whether Specific Media and JT have had any luck bringing sexy back to the brand in the eyes of the musicians and teenage fans who once flocked to Myspace.