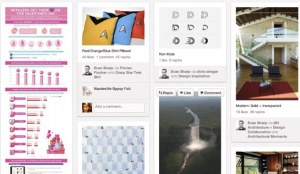 Scrap everything you think you know about the people of Pinterest.

Pinterest, the insanely buzzy invite-only digital pin-board site, has been pegged as the online place where 35-to-44-year-old Suzy homemakers congregate to swap recipes and fashion finds.

That characterization may be true of members in the U.S., but across the pond the average Pinterest user is anything but predictable.

Pinterest users in the U.K. are predominantly well-to-do, professionally-motivated young men between the ages of 25 and 34, according to data visualization startup Visual.ly. The company gathered data from Compete and Google DoubleClick Ad Planner Traffic statistics to compare U.S. and U.K. audiences in the infographic you can see below.

The average U.K. pinner appreciates venture capital and blogging resources above crafts and has an inkling for web analytics, SEO, marketing, and content management. Fifty-six percent of U.K. users are male and 29 percent fall into the highest income bracket, making $150,000 or more per year.

Granted, we’re looking at a much smaller pool of people—approximately 200,000 U.K. users to 12 million U.S. users—but the Brits have put a unique spin on how they use the site and seem to have completely different “pinterests,” if you will, from their American counterparts.