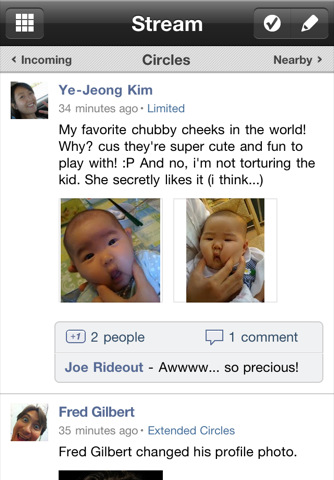 Slowly, but surely, the Google+ iPhone app is catching up to its more well-equipped Android sibling. Today Google released a new version of the iPhone app that can instantly upload your photos and videos, something the Android app has had since it launched last year.

Google also announced some minor cosmetic changes to its Circles interface on the web, which will make it easier to add and organize your friends on the social network.

The instant uploading feature works without much fuss. After installing the new Google+ app, you’ll be prompted to enable the feature, after which all the photos you take will be uploaded to a private Google+ folder. Unfortunately, the auto uploading doesn’t work in the background, so you’ll still have to open the app once in a while to keep your media synced. (Notably, Apple’s own photostream feature can backup your photos to iCloud in the background.)

The feature is something iPhone Google+ users have clamored for, and its addition could lead to more users relying on Google+ as their photo sharing platform of choice. Google has also added a “What’s Hot” stream to the app to let you easily find trending posts.

The web Circles interface now has a left-hand menu to let you explore your Circles, create new Circles, and search for friends. The app also adds direct access to your address books from Gmail, Yahoo, and Hotmail.