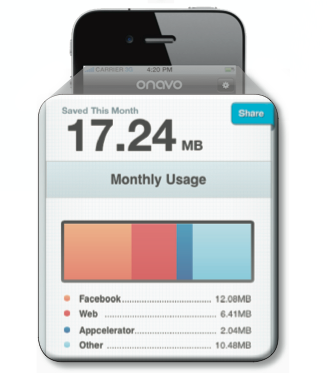 One of the great things about Onavo, the hot mobile app that compresses your iPhone’s data, is that most of its magic happens in the background. But while that makes Onavo a breeze to use, it also makes it easy for users to forget that they’re receiving the benefits of the app.

The company’s solution: simple push notifications, powered by the mobile services company Urban Airship, that keep Onavo users in the loop with the app’s data saving progress. After implementing the push notifications, Onavo reported a 75 percent increase in awareness and 50 percent increase in overall satisfaction from its users, according to a case study released by Urban Airship today.

“Being a utility app that runs seamlessly in the background can be a doubleedged sword: users can easily forget about your service,” said Onavo director of marketing Dvir Reznik in a statement. “Push notiﬁcations, with their ability to increase interactions and awareness levels, were important in providing a solution to that problem.”

It’s not exactly a high-tech solution, but for Onavo and other apps that run mainly in the background, push notifications can serve as a simple way to remind users of what’s going on. Onavo’s experience validates Urban Airship’s focus on notifications — the company announced last month that it has powered over 10 billion push notifications. The company is also going beyond simple text notifications with Rich Push, which will allow developers to include media like pictures, music, and video in alerts.

Onavo relied on Urban Airship’s notifications to inform users when they hit certain savings milestones, like when they saved their first megabyte, 100MB, and gigabyte of data. The alerts served to pull users back into the Onavo app and gave them bite sized accomplishments that they could share on social networks. After implementing the notifications, Onavo saw a 30 percent increase in shares and mentions.