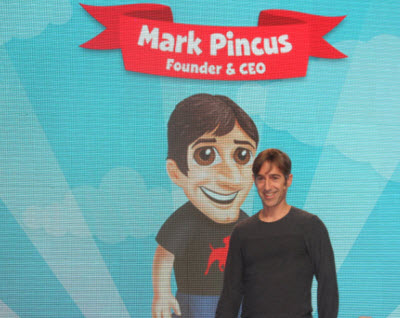 He made the announcement during a conference call with analysts after the company’s first quarterly financial release as a public company.

Driven by the strength of games like Words With Friends, the mobile game growth will help supplement Zynga’s player base of 240 million monthly active users on Facebook. Mobile is a big strategic opportunity for Zynga, as the market for games on mobile could be much bigger in the long run.

“The world is embracing play,” Pincus said in the call. “Social gaming and, more broadly, play is becoming the new TV.”

John Schappert, chief operating officer at San Francisco-based Zynga, said that Zynga’s core strengths are its tech infrastructure, its detailed analytics, and its huge user base.

He said that 80 percent of the company’s daily active users were on Zynga’s own proprietary zCloud, or its Zynga-owned data centers, at the end of the year, compared to just 20 percent a year ago. More traffic will be transferred to the zCloud this year, which means Zynga will not use Amazon.com’s Amazon Web Services data centers as much as it has in the past. The zCloud cuts costs and makes games run reliably and fast.

Its Scramble With Friends game, released in January, became a top-five brand in the Apple App Store. Daily, monthly, and monthly unique user numbers all showed growth in the fourth quarter, Schappert said.

CastleVille exceeded expectations when it launched in the fourth quarter, but Mafia Wars 2 was a disappointment. Early results from Hidden Chronicles, launched last week, are positive.

“The team has gotten a lot better at driving new-player conversion with packages and offers,” Pincus said. Dave Wehner, chief financial officer, said that the number mobile of payers is growing as well.

Reach, engagement, and monetization are the key measures of Zynga’s performance. The company’s monthly unique user numbers grew 38 percent to 153 million. Many of those users play multiple games, so the monthly active users is 240 million. FarmVille, Mafia Wars, and Poker accounted for 78 percent of revenues. The number of paying users in 2011 was 12.2 million, or about 5 percent of all players. Player conversion in the fourth quarter was 1.9 percent, up from 1.7 percent in the third quarter.

Zynga’s games are available as free-to-play titles. Users play for free but pay real money for virtual goods. A small number of users actually pay, but they buy enough virtual goods to make the entire game profitable, and Zynga is increasingly monetizing the users who don’t pay via advertising. Most of Zynga’s revenue is from virtual goods purchases, but advertising revenue tripled in the quarter. Both mobile and Facebook ad revenue grew, Wehner said. International revenue grew faster in the quarter than domestic revenue.

The company has games in 17 languages now, compared to five a year ago. Head count was 2,846 up about 92 percent from a year ago and 2 percent from the prior quarter. Zynga is still investing heavily in research and development.

Capital expenses were down in the quarter, but the company still spent money as it built out its private cloud, zCloud. Zynga has a line of credit that allows it to borrow up to $1 billion. Despite the cheery nature of the talk on the call, Zynga’s stock price continued to fall in after-hours trading, with the stock at $13.42 a share, down 6.5 percent from the close. But Zynga’s stock price on Tuesday’s regular session rose 6.95 percent.

Schappert said Zynga is still working on Project Z, which is in closed beta testing. The site is Zynga’s own social network where it will host its own games. It connects with friends on Facebook. Schappert said he hoped that Project Z could launch soon. Zynga spent $110 million on research and development in the quarter, up 139 percent. Most of that went into game development.

“The results were in line, guidance was actually very good, but the comment about it being back-end loaded caused the stock to pull back a bit,” said Michael Pachter, analyst at Wedbush Securities. “I am a little disappointed that they didn’t guide to Q1, so there will probably be continued volatility for a while.”

Wehner said on the call that the back-end-loaded 2012 is a consequence of the pipeline of games and the usual pattern of bookings during the first half of the year. Wehner said that Words With Friends is an ad-driven game with very little virtual goods purchases associated with it.

Atul Bagga, an analyst at Lazard Capital Markets, said the quarter seemed “pretty strong” with revenue and earnings per share coming in above expectations. User numbers and other metrics were also up in the quarter, so he continues to believe Zynga has a large opportunity just by growing monetization, mobile users, international revenue, and expanding to new platforms.

Schappert said, “We have a bunch of games in the hopper right now, and we will release them when they are done and when they are great.”