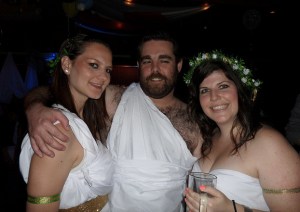 Apple has the best kind of problem: A sizable $90 billion in cash burning a hole in its pocket.

At the Goldman Sachs Technology and Internet Conference Tuesday, Apple CEO Tim Cook was asked why the company has not taken the usual moves of buying back stock or issuing a dividend to shareholders. Investors, while happy with the epic stock price, are eager for a payout.

Cook acknowledged that deciding how to best spend that money is a major topic being discussed within Apple.

“I only ask for a bit of patience so we can do this in a deliberate way and do it in a way that’s best for shareholders,” said Cook. “We’re judicious, we’re deliberate, we spend our money like its our last penny … We’re not going to go have a toga party or do something outlandish.”

When a company is sitting on a huge pile of cash, as Apple is, it is expected to shell out a dividend to investors and to spend money on things that will make it even more money. Cook said that so far, the company has spent billions of dollars on its supply chain, intellectual property, acquisitions, retail, and the Apple infrastructure. He acknowledged that those big dollar items still aren’t making much of a dent.

Cook said that since becoming CEO, he has adhered to the traditional Apple approach of not simply spending for the sake of spending but added that he is not religious about holding onto the money.

As that pile approaches $100 billion, however, investors may start to become more insistent that Apple do something with it.