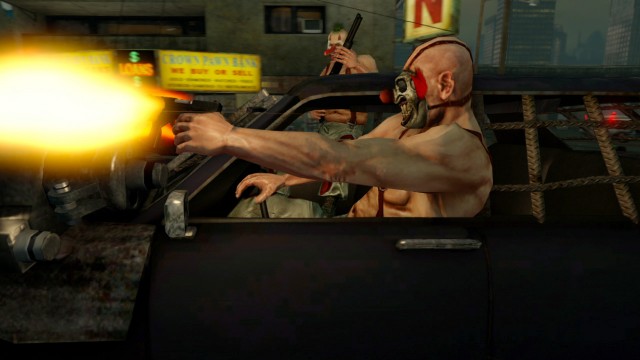 Twisted Metal is the longest-running PlayStation-exclusive franchise, outdating Crash Bandicoot, Warhawk, Uncharted, and even Gran Turismo. Co-created by the notorious David Jaffe, also of God of War fame, the series has seen a number of releases across each Sony platform since first debuting in 1995. Twisted Metal for the PlayStation 3 is not only the franchise’s big comeback opportunity and first appearance on a current-generation console but also an all-important sophomore outing for the Salt Lake City, Utah-based studio.

There’s some interesting history behind this Twisted Metal title, a lot of which was touched upon in our recent interview with various team members of Eat Sleep Play. Essentially, the 2012 edition began life as a downloadable, multiplayer-only car combat game — but not necessarily a Twisted Metal title. About two years ago, already after two years of development, Sony insisted that the game be given a story mode and get upgraded to a full-priced retail package.

It’s also important to point out that just before the release of Twisted Metal, Eat Sleep Play saw layoffs hit nearly 25 percent of the team. Jaffe himself, who co-founded the studio, also announced his departure. Similar to the closing of the studio behind Little Deviants, a PlayStation Vita launch title, the last-minute drama suggests a problematic development history, which almost always leads to a damaged end product.

Perspective
My fondest memories of Twisted Metal include knocking down the Eiffel Tower and driving up its toppled remains in Twisted Metal 2: World Tour; rooftop battles in various iterations, where jumping between skyscrapers was a thrilling risk-versus-reward strategy; and almost every part of Twisted Metal: Black, unarguably the pinnacle of the entire franchise. Since Black, however, Twisted Metal slumped into handheld-only status for several years, and I eventually lost most of my attachment to the series.

And so here we are, over half-a-decade into the PlayStation 3’s life cycle, and Sony’s longest running exclusive franchise finally sees a proper this-gen release. Even before unwrapping the game, I was already disappointed. Eat Sleep Play has opted to drop all but four playable characters from the famed roster. That means there’s a good chance you’re going to be pissed that your favorite character is not represented in the story. Just watching the character selection in the video below reminds me of all the characters I would have liked to have seen featured. (Twister was always my go-to girl until Dollface, for example.)

Above: All the characters you won’t be playing as in the new Twisted Metal.

As mentioned in our interview, the reasoning behind the limited scope of the story is to ensure a unique, quality experience. Live-action cutscenes replace the crappy motion-comic cinematics of the older titles and the solid CG in Black, and while they are a worthwhile addition, I hardly see the justification in stripping out all the other characters. Sweet Tooth, the franchise’s serial-killer clown mascot, returns. It should be no surprise that his story pulls no punches, but it was a bit startling to step back into the mind and perspective of a relentless butcher, especially thanks to the more realistic (yet still stylized) story sequences.

Joining Sweet Tooth are Mr. Grimm, Dollface, and Preacher, each looking to win a deadly vehicular combat tournament and have a wish fulfilled by the demonic Calypso. Like an episode of Tales from the Crypt, even when they claim their reward, Calypso always has a twisted ending in store for them. I was a little disappointed by Sweet Tooth’s ending in particular, though Mr. Grimm’s was worth the ride. I was severely crushed, however, by Eat Sleep Play’s poor handling of Dollface, who first appeared in Twisted Metal: Black and was arguably the most interesting character since Sweet Tooth himself. Sadly, she has now been reduced to a stereotypical wannabe model, with the writers struggling to find a cohesive way to tie in the cherub mask she wears.

All the talk of sacrificing content to focus on a more refined story seems extremely questionable when the design director is giving presentations on why video games shouldn’t have stories. Each of the four characters also commands a faction of nameless goons, but it’s never explained why. Who are these people, and what do they get out of the tournament? Twisted Metal characters have always been tormented, lone-wolf types, so it’s a little strange to have another clown riding shotgun and calling Sweet Tooth “boss.”

David Jaffe publicly stated that if you’re only interested in the story in Twisted Metal, you should probably just rent the game. I recommend skipping that step too, saving yourself the trouble, and watching it all on YouTube in a couple of days.

Read on to understand why.