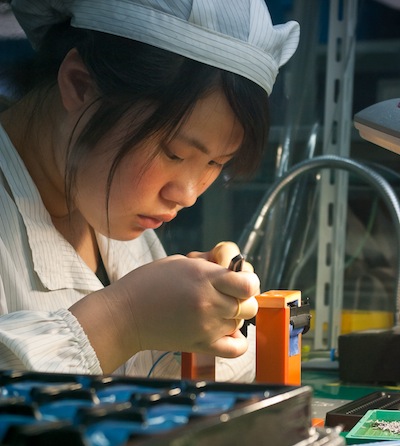 If you’re angry about Apple’s manufacturing process, you should be. But don’t stop with Apple.

As everyone knows by now, iPhones and iPads are built in huge Chinese manufacturing plants where tens of thousands of people work 12-hour shifts for little money, have little privacy, and are exposed to toxic chemicals and unsafe conditions every day. We’ve been hearing similar stories across other industries for years, but this one’s on us — the tech community.

That’s right — all of us. It’s not just Apple. Motorola (whose acquisition by Google got a green light this week) and Nokia are doing it. Toshiba, HP, Dell, and Sony all use factories the New York Times reports as “bleak.”

It’s virtually guaranteed that behind every gadget stands an army of underpaid workers and polluting factories.

Apple is hardly the only electronics company that makes use of cheap manufacturing provided by companies such as Foxconn, its major supplier, which hit the news a few years ago because of a rash of suicides among its workers. Almost every other electronics manufacturer uses the same manufacturing principles, many of them use the same manufacturing companies, and most of them scrutinize their suppliers far less rigorously than Apple. In fact, Apple chief executive Tim Cook has a point when he says that Apple really cares about conditions in its suppliers’ factories: The company has done a lot to audit those factories and to insist that its suppliers clean up their acts. Indeed, Apple is the first tech company to enlist the support of the Fair Labor Association, a trade group that until now has focused on working conditions in clothing factories.

That’s not to say that Apple’s free of blame. It’s just that many other companies are culpable too.

The Kindle Fire might have been designed in Seattle, but it was manufactured in China, most likely by Quanta Computer, a Taiwanese company with 30,000 employees worldwide and major manufacturing facilities in China. Do you know how many Quanta factory workers committed suicide last year? (I don’t.)

Foxconn, Huawei, ZTE, Quanta, Compal Electronics: These are the companies that actually make the gadgets we use. While they may tout high ideals (Quanta’s website includes documents with titles like “love the Earth” and “Truth Goodness Beauty”), their approach to business is matter-of-fact: Design and build electronic products with increasing speed and precision and decreasing costs. Was your new Motorola Droid Razr assembled by workers being paid a fair wage, without polluting local rivers and without strip-mining some country’s copper reserves?

In a global economy, making electronic goods means building factories wherever you can find sufficiently talented labor at the lowest possible cost. It’s not just cost, either: The just-in-time inventory principles of modern companies press their suppliers to turn on a dime. Need 3,000 new factory workers overnight, or 8,700 engineers in two weeks? China can deliver, and America can’t, at any price.

Given the hundreds of components that go into making something as complicated as a smartphone, the manufacturing process involves dozens of companies with scores of factories in as many different locations. All of them are getting squeezed by an economy that demands faster and faster turnarounds regardless of the human costs.

I say this as a gadget lover, and one who has spent much of his career writing about electronics, scourging the worst and glorifying the best. The best are elegant tools for the mind that have helped humanity immensely and are reshaping society and the world in profound ways, often for the better.

But making these gadgets requires a lot of steps. Along the way, some of those jobs are very good and some are abysmal.

Turning sand into silicon or mining lithium is dirty, nasty work. Turning purified silicon into wafers with billions of microscopic transistors is the work of bunny-suited engineers with master’s degrees and good salaries. Assembling packaged chips onto circuit boards and gluing LCD screens onto the chassis of phones is rote labor performed by minimally skilled workers who can easily be trained and replaced whenever necessary.

Most of this work happens outside the U.S., where different legal standards apply. And good luck finding out about the details of that process. I’ve been trying for years to get various companies to let me write the story of how they make their devices, but they’ve always shut me down, providing only generic information. There may be competitive reasons they don’t want to expose their whole supply chain, and it’s complicated enough that they may not even know where all their components come from. But it’s a fair bet that they don’t want a reporter scrutinizing that supply chain because they know it’s full of dirt.

(If any manufacturer out there disagrees with me, I’m all ears. I’d welcome details on where your components are made and assembled, and if I get a full picture, I will write about it.)

In other words, ditching your iPhone and picking up an Android phone because you’re concerned about conditions in Foxconn’s factories is just dumb.

Instead, let’s get mad about the inability of the American economy to compete on the global arena with the speed and precision of Chinese factories.

Let’s get mad about the poor labor conditions and lack of environmental controls throughout the electronics manufacturing process in other countries.

But let’s not pick on the most prominent seller of gadgets just because it’s an easy target.

Everyone who has ever bought a computer, cellphone, tablet, or television bears responsibility for this industry’s lack of transparency and accountability.

If you subscribe to my newsletter you can read these columns a whole day before they appear on our website. And check out my other Dylan’s Desk columns.