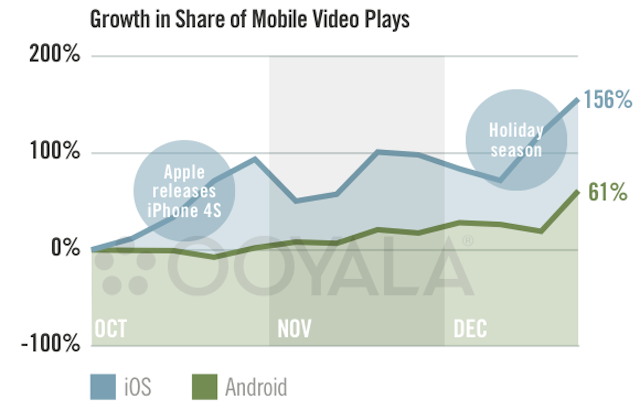 Couch potatoes nearly doubled the amount of streaming videos played on mobile devices and smart TVs in fall than it did in the summer, according to Ooyala’s fourth quarter 2011 video index report.

Ooyala offers a video platform for content owners to upload their video, analyze audience engagement, and easily monetize video content. The company claims that nearly a third of all streaming video viewer in the U.S. is done using a Ooyala player.

“While people are still watching much more traditional TV than streaming video, our data shows we’re on a clear and irreversible course toward an IP-delivered future,” said Ooyala Co-founder and President of Products Bismarck Lepe in the report.

The report, which tracks viewing habits of over 100 million monthly users, indicates that the boost in streaming video consumption over connected devices was aided by the October launch of Apple’s iPhone 4S, continued growth from Google’s Android OS platform, and the December holiday season. Video viewing on Google TV was also up by 91 percent from the third quarter, although that’s not exactly saying much if Google TV app install data is any indication.

People watching videos on tablets are also far more engaged than those watching on a desktop, according to the report. On average, tablet viewers were 45 percent more likely to complete 75 percent of video played on the device.

Check out a condensed sample of the full Q4 2011 video index report in Ooyala’s infographic embedded below.