Groupon is in the process of testing a new VIP service that will cost $30 per year and give users early access to deals, easy refunds, and more, according to a Business Insider report.

The company reported poor-to-mixed results with its last quarterly earnings, so it is likely looking for new ways to generate revenue and ways to keep users buying more deals. VentureBeat columnist Rocky Agrawal rightly pointed out last week that the company continues to lose money and keeps changing how it wants to be measured.

Perhaps VIP access, which could generate revenue outside of deals themselves, is a step in the right direction. VIP access will give users early access to deals, the ability to buy expired deals, and the ability to get refunds for any Groupon no matter what.

The service is being tested in only a few markets right now, but it will likely expand further over the next few months. The company said it is specifically targeting “addicts” and will give those users a 3-month free trial to test the service out.

However, as someone who gets barraged with Groupon deals daily, I’m not sure how many people would actually buy into this. You already get a ton of opportunities to buy deals, so would you really want to shell out $30 more a year? Aren’t many Groupon users already penny-pinchers anyway? What do you think?

You can read an introductory Groupon VIP letter below: 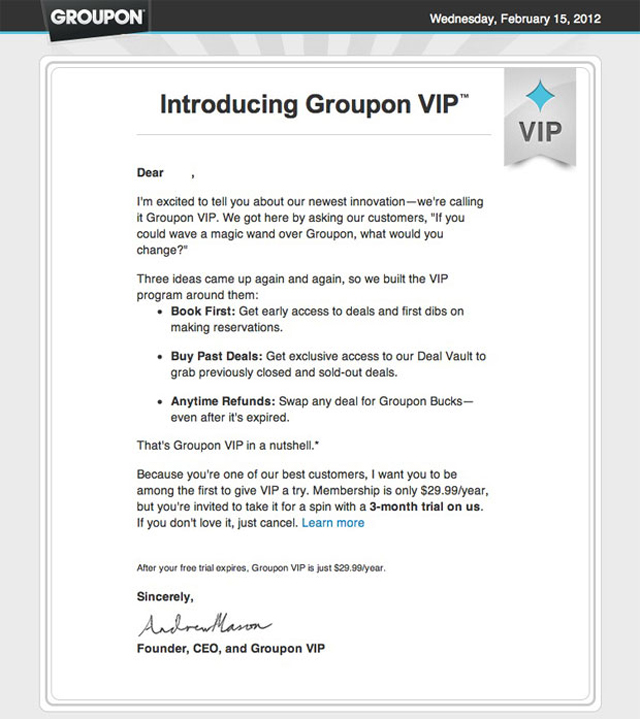