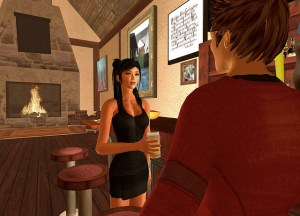 Anyone remember Linden Lab? How about its game, Second Life? Well, it was the talk of the middle of the last decade (and winner of a 2008 Emmy award), and it’s making moves again. It’s just announced the acquisition of interactive fiction game studio LittleTextPeople.

What this means is that Linden Lab is now able to diversify its gaming offerings, using LittleTextPeople to support that development effort.

“LittleTextPeople brings a depth and breadth of AI and interactive story development expertise that is a great fit for Linden Lab as we launch multiple new products,” said Rod Humble, Linden Lab’s relatively new CEO. “The result of this investment will be a new type of digital entertainment that modernizes the novel as a shared story-telling experience.”

The plans, according to the press release, include several new stand-alone projects to be released this year. This is in contrast to the company’s last few acquisitions, like Mark Interactive, XstreetSL, and OnRez, in which the technology was used to enhance Second Life itself.

Perhaps with the new acquisition, Linden Lab is looking for another Emmy Award? LittleTextPeople was founded to simulate and model social practices as well as specific personalities, so perhaps this does have application to an avatar-based gaming system, after all.

“Yes, Richard [Evans] and I now work for Linden Lab, putting our expertise towards new stand-alone products, said Emily Short, Chief Textual Officer of LittleTextPeople, in an email this afternoon. “It’s been a very exciting process, and I’m really looking forward to being able to share with the world what we’re working on.”

Only time will tell, of course, if this results in new games, new interactive fiction, new Second Life features, or an amalgamation of all three.