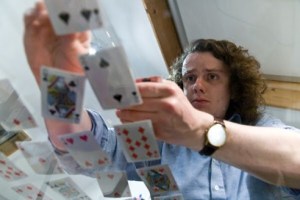 There is nothing extraordinary about Ed Cooke’s brain. Sure he can memorize a 1000 digit number in less than an hour, but so can you, he believes.

“It’s not like I was born with special cognitive abilities. I trained myself to have an incredible memory, and those are skills other people can learn,” he told VentureBeat by phone. Cooke and his co-founder, the neuroscientist Greg Detre, have raised $1.05 million for a new startup, Memrise, to help the masses leverage Cooke’s legendary memory tricks.

“The hilarious and tragic thing about memory training is you spend so much time inside your head,” Cooke explained. Serious students of memory, like Joshua Foer, who trained with Cooke and chronicled the process in his best seller, Moonwalking with Einstein, wear earmuff and blinders while practicing their mnemonic techniques. “But one of the things that makes a something really memorable is if it was fun for you, if you engaged with it.”

Cooke and Foer would tell themselves elaborate stories, associating vivid images with the sequence of numbers they had to recall. Memrise takes a similar tack, teaching people Chinese characters, for example, by transforming each one into an animated sequence.

Instead of having people train in isolation, Memrise incorporates elements of gaming and crowdsourcing to keep users engaged. “We’re not trying to train people to perform the heroic feats of a memory grand master. We want this to be a fun, collaborative experience, like World of Warcraft, that just happens to be about learning.”

Memrise is offloading a lot of the hard work that goes into memory training: generating striking images and reminding the brain to recall the memory on regular basis. Cooke says that returning to a memory is crucial, and the Memrise has algorithms that learn when a student needs a friendly reminder, via an email say, to recall a certain lesson. Prof. Detre has worked on the timing and calibration of the learning curve on Memrise, as well as ways in which to keep very similar memories, whether its words that sound alike or characters that appear very similar, as distinct memories in the mind of the student.

Right now the service focuses on languages, people can Mandarin, French, Spanish, and Italian. The hope is to eventually expand to all topics. The startup recently paired with The Guardian newspaper to help readers memorize different kinds of herbs.