The apple of Apple’s eye, Twitter, will soon be the default social graph and social network for all iOS and Mac devices, as Facebook once again gets the shaft.

Apple has integrated Twitter into OS X Mountain Lion, the next-generation operating system for Macs announced Thursday and slated for summer release. The decision has profound implications for Twitter and will, should recent history repeat itself, help it dramatically increase signups and tweet volume across the world.

Twitter will be baked into the new Mac operating system in much the same way that is weaved into the iPhone, iPod touch, and iPad experience today.

After signing into Twitter once, members can tweet links, photos, and content from the share button built into Apple’s Safari, Notes, Reminders, Photo Booth, and iPhone apps, and from third-party apps that update to support the integration. Twitterers will also receive notifications for Twitter mentions and direct messages on the desktop, and notifications will appear in the new Mountain Lion Notification Center. 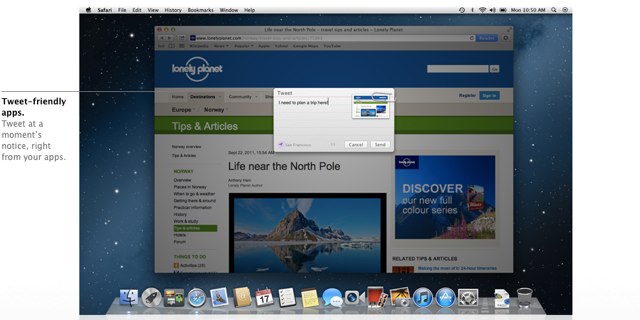 If this all sounds trivial, consider that Twitter is attributing an enormous amount of its recent new user and tweet volume growth to iOS integration.

“iOS 5 makes Tweeting easier than ever,” a Twitter spokesperson told VenterBeat Thursday. “Since the launch we’ve seen signups more than double and the number of Tweets sent increase over 90 percent.”

Apple released iOS 5 with Twitter integration in October 2011. Four months in, Twitter is clearly reaping the benefits of being the favored social network. As I said at the time, “It’s as if Apple reached down in a God-like fashion, grabbed Twitter with its almighty hand, and lifted it up to the social networking heavens.”

Flickr and Vimeo may also soon experience the advantages of having a friend in a high places. The photo and video sites are also integrated into the Mac OS X Mountain Lion sharing experience.

Noticeably absent, however, is Facebook. Apple and Facebook, we hear, are actively attempting to mend their complicated relationship, but neither is talking openly about Mountain Lion integration.