If you’ve not played Dear Esther yet, you really should. But before you do, the most important thing to know is that it’s not a game. You buy it through Steam, install it the same way and load it up to a familiar Half Life menu, then you use the familiar WASD to walk around. It feels like it should be a game – but it isn’t.

The game itself has been reviewed here already, but I want to talk specifically about what Dear Esther does for storytelling that other games don’t.

For a start, there are no aliens, or explosions, or guns. There’s no score and very little to tell you where to go. Dear Esther is a story, pure and simple: a haunting, introspective and obscure interactive story. It begins on the desolate shore of an island, and gives you no clues about who you are or what’s going on. There’s nothing to aim for and no objectives – the only thing to do is start wandering. 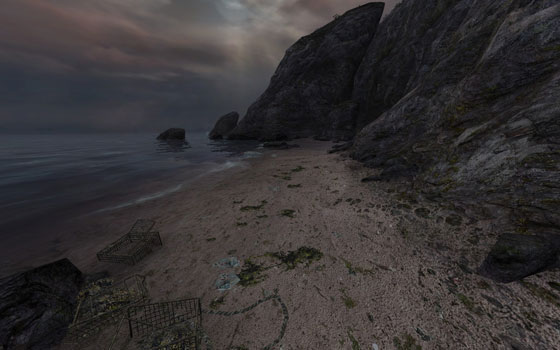 For a game (I’m going to call it a game because that’s what it most resembles, even if it isn’t actually one) in which all you do is walk around it’s incredibly atmospheric. There’s a constant sense of desperation and quiet panic, and some of the locations are both beautiful and claustrophobic. Movement is glacially slow, and you’re stripped of the abilities you’d expect in a game like this – no shooting, no collecting, no jumping, even – which heightens your feeling of vulnerability.

At times it felt like Amnesia: The Dark Descent, which also gets its scariness from your utter helplessness, but the feeling here is of muted paranoia rather than all-out pant-shitting terror. There are no scary moments, but Dear Esther makes you feel like you’re always just about to come up to one. The music, an effective and atmospheric mixture of subtle orchestral sounds, chants and harmonies, swells as you round a darkened corner – but instead of a sharp-toothed demon you get another section of narrated story. 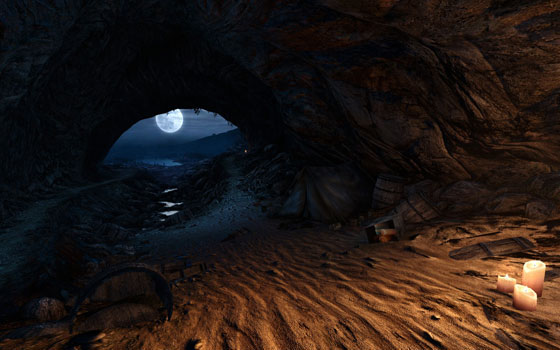 Esther is different from other games. Whereas other, richer franchises concentrate on stuffing ever more features into games – multiplayer modes, drop-in games, inventory systems, randomly generated levels – Dear Esther is notable for its sparse gameplay. It’s this stripped-back mechanic, a game pared back to the bare bones, that lets it tell such interesting, emotional stories. The lack of interactivity and choice means that there’s no worrying about whether players will choose A or B, or if they’ll shoot an important NPC, or start jumping around and teabagging corpses and generally making a mess of things.

All games live somewhere on a spectrum between pure gameplay and storytelling, but Dear Esther is so far over to the side of narrative that it’s really more of an interactive story than a game. It reminded me of the interactive trailer for Super 8 that came with Portal 2 – not a technical triumph, or a stunning graphical showcase, but an interesting way of using existing media to tell stories in a new way. There’s a lot of potential here; the combination of interactivity and strong narrative, well-told, is really powerful.

And despite a few rough edges, I really enjoyed Dear Esther. It’s not often that something so experimental comes along, and I enjoyed the mysterious ambiguity, although I’m sure it’s not everyone’s cup of tea. Cinema has a rich tradition of obscure, meditative stories that are open to interpretation, but films have the luxury of an audience who do nothing bit sit and gawp at a screen. Gamers are more inquisitive by nature; they want to get up and walk around and poke things and collect stuff and do things that tend to break stories. 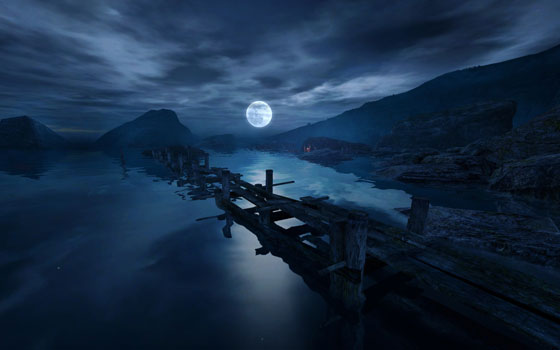 Interactive stories like Dear Esther are rare gems – for now. Games are still something of a sub-culture, but the people now starting to act, to write and to produce stories are gamers who have always had a console or a smartphone or a PC. They’ll be the ones working out how you tell a story in the middle of a multiplayer game, or how an interactive narrative can give you more than just the illusion of choice. These are exciting times.

In the meantime, if you’re not sure you’d like Dear Esther, you should give it a go. At roughly an hour of play it’s pretty short, and it’s only six quid on Steam. But the important thing is that it’s not a game; if you’re looking for the next Half Life then you’re in the wrong place. Dear Esther demands patience and an open mind, but it’s well worth making the effort.