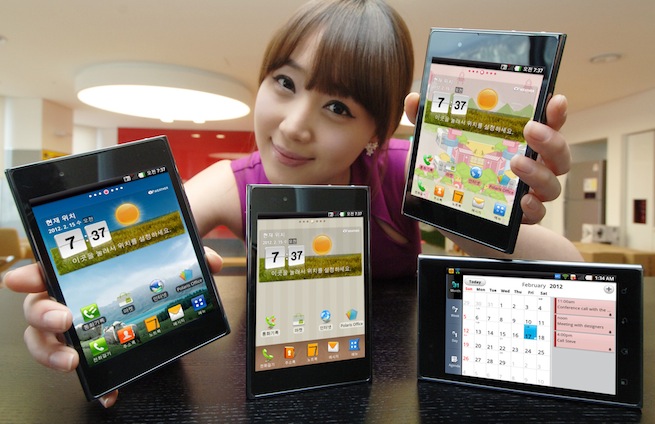 LG unveiled Sunday its new 5-inch device that blurs the line between phone and tablet. It’s called the Optimus Vue.

Before Samsung released its Galaxy Note, the term “phablet” wasn’t in our vernacular. But since the Note measured in at 5.78 inches tall by 3.27 inches wide with a 5.3 inch screen, it pushed the limits of how big a smartphone could be. Especially since the Note is just two inches smaller than the seven inch tablets on the market, including the Kindle Fire and the Samsung Galaxy Tab.

Now, LG is diving into the phone-tablet form factor with its Optimus Vue. The Vue is slightly smaller than the Note with a five-inch screen. The Optimus Vue also takes a hit in screen resolution, delivering 1024-by-768 pixels compared to the Note’s 1280-by-800. Both phones are come with a 1.5 Ghz dual-core processor and eight megapixel rear camera. The Optimus Vue also has 32GB internal memory and runs Android Gingerbread 2.3. And what phone-tablet hybrid would be complete without a stylus? The Optimus Vue comes with a Rubberdium pen to use when your finger just won’t do.

LG describes the phone as “the slimmest among all LTE phones currently on the market and is perfectly suited for a hand and fits comfortably in a jacket pocket.” Note that it doesn’t mention a jean pocket, because we’re sure even LG realizes this phone won’t fit into most pants pockets.

The Optimus Vue launches in March 2012 in Korea. No word yet on whether it will make its way to Europe or the United States. Maybe that’s a good thing though, I’m not sure America is ready for two Frankenstein-like phablets just yet.

LG hasn’t yet released pricing details for the device.