After several leaks, Microsoft has confirmed that its SkyDrive cloud storage solution is about to receive a major update with desktop syncing, a SkyDrive Metro app for Windows 8, secure remote access, and other helpful additions.

There has been much movement in the cloud-storage space in the past six months. Apple recently announced it would directly integrate its consumer cloud solution, iCloud, with its upcoming Mountain Lion Mac operating system. Google may also enter the fray with its own Drive cloud-storage service in the next few months. And of course, you’ve got players like Dropbox, Box, SugarSync, and Amazon Cloud Drive that continue to innovate in this area.

Microsoft detailed its latest additions, which will come to SkyDrive in the next several months, on the Building Windows 8 blog. The company used this spotlight as a chance to further detail its vision of how cloud storage should work in applications and across an operating system.

“We think what people want in personal cloud storage is a single drive that’s available across all of their devices, tailored to the experiences they’re using, providing instant, secure, and private access to their files, and sharing files and folders with people they choose,” the company wrote on the blog. “To bring this to billions of people, our approach is to seamlessly connect the files (and behaviors) that people have today on the PC with the app and device experiences that they will use in the future. Rather than using a patchwork of services, people can use one service to connect to their files — with no compromises.”

SkyDrive is currently available via any browser at Skydrive.com, and through applications on Windows Phone, iOS, and Android. With the new additions, SkyDrive will see deep integration with the Windows 8 OS and new integration into Windows Explorer on the desktop for Windows Vista, 7, and 8 users. The biggest addition is arguably the Windows 8 app, which you can see screenshots above and below. 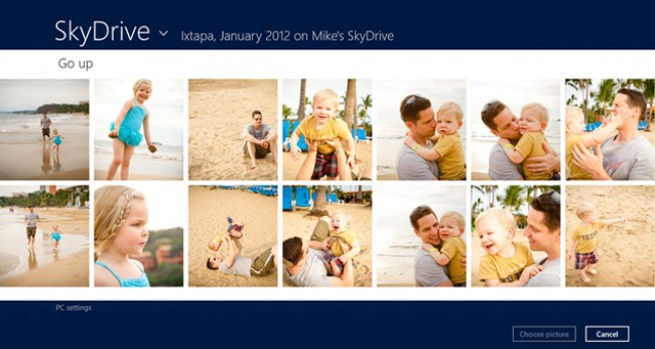 The Windows 8 Metro app will bring cloud storage to a touch-friendly interface and offer an API so third-party applications can tie themselves to SkyDrive. The Metro app has been designed to deliver “a fast, fluid, touch-first version of SkyDrive that makes it quick, easy, and even fun to browse and access your files” and to make “your SkyDrive available for use from any Metro style app via the file picker (open/save) and the new Share charm in Windows 8.” You’ll be able to get your hands on the new SkyDrive Windows 8 app in preliminary form when it releases the Windows 8 Consumer Preview late this month.

Microsoft provides 17 million active customers with SkyDrive storage, many of which privately share photos and collaborate on Office documents, according to the blog post. While that number is paltry next to iCloud’s more than 100 million users or Dropbox’s more than 50 million reported users, it would not surprise me to see more people jump on to SkyDrive as it continues to include more features and additional Windows users learn about it.

SkyDrive also has implications for helping enterprises too. The service already allows for easy storing and collaboration with Microsoft Office documents, so with more tailoring for security and teams, it could become a serious competitor to players like Box and Egnyte.

The company did not mention storage plan options, but Brazilian site Gemind recently leaked some SkyDrive prices that suggest users can pay $10, $25, or $50 extra per year to get 20, 50, or 100GB over the base 25GB.

You can additionally view a four-minute video detailing the new SkyDrive app below: