Young or old, if you’re loaded, you’re far more likely to own a smartphone.

The finding comes from analytics firm Nielsen. The company surveyed more than 20,000 mobile consumers in the U.S. and found a strong correlation between age, income, and smartphone ownership.

Adults aged 24 to 34 showed the highest proportion of smartphone ownership: 66 percent indicated they owned a smartphone. Overall smartphone penetration in the U.S., according to Nielsen, was at 48 percent in January.

Nielsen also found that, in general, for all age groups, the more money people make, the more likely they are to own a smartphone. Youngsters 18 to 24, however, skew higher for smartphone ownership even at lower salaries.

Clearly, parents and grandparents with extra cash on hand are happy to get hip with the smartphone-toting times. After all, it’s what the kids are doing.

On the whole, consumers are opting to upgrade to smartphones over feature phones. In the past three months, more than 50 percent of people in search of a new device, under the age of 65, chose to purchase a smartphone. And if you look at the 25 to 34 age group specifically, the percentage of smartphone choosers is a whopping 80 percent. 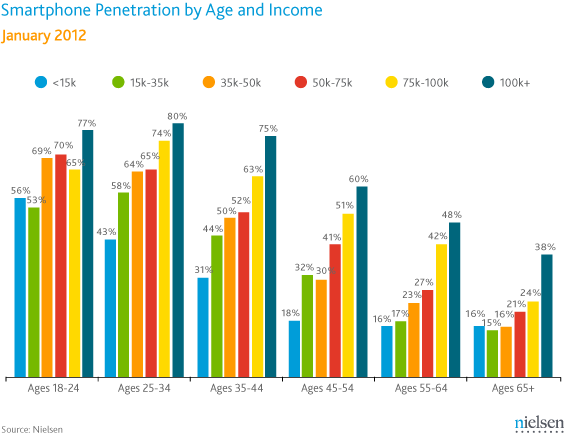