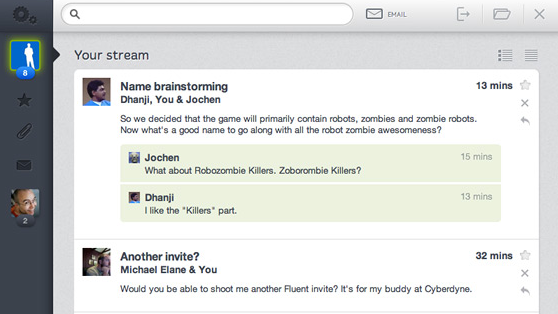 We get it, going through hundreds of emails is not nearly as exciting as commenting on your friends’ statuses or retweeting a witty tweet. Fluent gets it too, so it took the look of Facebook and Twitter and applied it to a new way to manage your multiple email accounts.

Former Google Australia employees Cameron Adams and Dhanji Prasanna began working on Fluent last year. Jochen Bekmann, another former Googler joined the cause in November 2011. According to the Sydney Morning Herald, which first reported on Fluent, the group quit Google after the company did away with Wave.

Fluent works exclusively with Gmail, which isn’t surprising given where the founders used to work. More email services, such as Hotmail, are planned in the future. Emails are presented as threads, with the subject and a snippet of the message displayed first and a “more” link you click to display the body of the email. Replies are shown just like comments on Facebook.

The point of Fluent is to streamline emails and focus on the content, not the context. Contact information in each email doesn’t feature prominently, similarly to your friends’ names on Facebook and Twitter. Image attachments can be viewed as a slideshow (again like Facebook) and there is a drop-down menu to forward messages or mark them as spam.

One of Fluents most talked about features is Instant Search, which will grab search results as you start typing. Sound familiar? It’s the main feature of Google’s search, but the company has yet to include it in Gmail.

I can definitely see why Fluent is compared to Facebook, but the look reminds me more of the enterprise social network Yammer. This style of email might not be for everyone (I know I would probably dislike it), but there is definitely a broad appeal.

Fluent is free, but in private beta. To request an invite, go to the company’s website. Check out the video below for a look at Fluent.