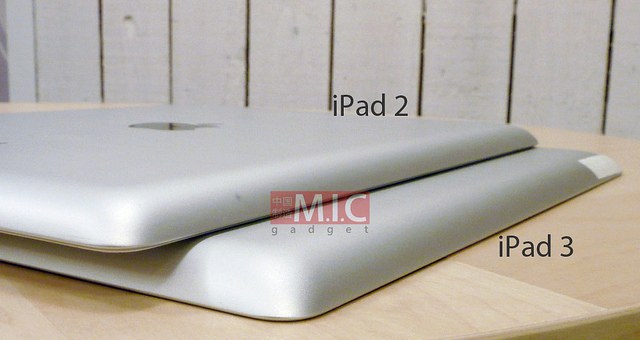 What better way to come off the long weekend than with a bunch of Apple rumors? It looks like the iPad 3 may be getting a bit of junk in the trunk, while the iPhone 5 could be another fall release for Apple.

The Chinese tech blog M.I.C. Gadget received an early production version of the iPad 3’s rear case from “reliable sources,” which shows that the new tablet will have even more tapered edges than the iPad 2 and will also be around 1-1.5mm thicker.

Apple was likely forced to increase the iPad 3’s thickness to fit in some new hardware, like the higher resolution Retina Display (which was semi-confirmed by counting pixels on an early production display), improved camera, and possible inclusion of LTE 4G technology. The iPad 3 is rumored to sport a new quad-core A6 processor from Apple, though a recent posting on a Chinese forum says otherwise, thanks to a picture of a purported iPad 3 logic board with an “A5X” chip. Judging by Apple’s naming conventions, the A5X (if it exists) is most likely a slightly faster version of the dual-core A5 on the iPad 2.

According to the most recent rumors, the iPad 3 is expected to launch on March 7.

As for the iPhone 5, it seems that Apple may be settling on fall as its new season for iPhone releases, according to the Japanese tech blog Macotakara. The site, which has been accurate in the past about Apple rumors, also cites “reliable sources” for its information. I wouldn’t be too surprised if the iPhone 5 does land during the fall, because it wouldn’t make much sense for Apple to cut into the iPhone 4S’ life cycle. People are still hot for the iPhone 4S, and Apple will want to milk that demand for all it’s worth.

Via ZDNet; Image via M.I.C. Gadget