In today’s yearly update cycle, prevalent in both smartphones and tablets, game systems are seriously antiquated. The PSP was released back in 2005 in the US, nearly seven years ago, and the Nintendo DS just a few months earlier. At the time both consoles were considered powerful, but Moore’s Law quickly changed that. Today, the Vita ships with a quad-core ARM Cortex A9, 512MB of RAM, and a PowerVR graphics processor with 128MB of video RAM. This hardware will likely be overshadowed by phones and tablets in two years, if not sooner, and will be considered old in three.

Because apps are not yet downloadable to the Vita, and there are limited benchmarks I can perform (due to the Vita’s unique operating system and the newness of the hardware), I’ll briefly discuss the internal components compared to other devices.

The CPU is very similar to what is found in many smartphones today. The iPhone 4S uses a dual-core ARM Cortex A9, compared to the Vita’s quad-core A9. My research indicates that the Vita’s processor is capable of reaching up to 2GHz but averages 800MHz. This is to conserve battery life; running at 2GHz would run down the battery within an hour and a half. It’s unclear whether Sony has locked in the CPU at 800MHz for developers until a future date as it did with the PSP (which originally was locked at 222MHz until two years after its initial release, when Sony released a firmware update that opened the processor up to 333MHz).

512MB of RAM matches the Xbox 360 and is slightly more RAM than the PlayStation 3. It’s also half the RAM of most of today’s high-end smartphones.

The PowerVR GPU (a SGX543MP4+) is a quad-core video processor and is an upgraded version of what’s inside the iPhone 4S and iPad 2, with twice as many cores and additional clock speed. By March or April I expect Apple to announce its next iPad with a similar GPU. That gives the Vita at least one year as the top dog.

The Vita also includes a SIXAXIS motion sensor like the one found in the PlayStation 3’s controllers, as well as an 802.11 b/g/n Wi-Fi antenna, an HSPA+ antenna for 3G data speeds, Bluetooth 2.1, and two VGA (640×480) cameras. The Vita has no internal memory, and without a specially made PlayStation Vita card, users can’t buy games online. However, games are sold as cartridges and saves can be stored on the games themselves.

Like the Nintendo DS, the Vita has a rear and front VGA camera, and like the DS and newer 3DS, the camera is terrible. In both good and bad conditions the Vita took shots akin to the Motorola Razr. Not the new Droid Razr, the 2004 original. The 0.3MP cameras are just awful, as you can see below. We’ll take a closer look at camera quality later on, but for now don’t expect to take better photos with the Vita than any camera or phone that’s come out in the last five years.

The Vita is not intended to be used for still shots, though it has that function. The rear camera is intended for augmented reality, and the front camera is for potential VoIP apps like Skype, which have been available on the PSP. Both cameras are fast enough to deliver those functions, though as of press time augmented reality games and apps are not available.

Speaker placement has been a regular problem on Sony’s portables. The Vita’s stereo speakers are directly beside the analog sticks and are significantly larger than the speakers on the PSP. In all of my testing I consistently blocked the speakers with my thumbs. This muffles sounds, but is generally not problematic.

Sound quality on the Vita is good, not great. Tones are clear, though some sounds are hard and sharp and can be painful. The Vita doesn’t get very loud, and even at full volume it’s difficult to hear in noisy environments. Sound reproduction is generally accurate, but not always pleasant. I highly recommend using either Bluetooth or wired headphones, especially for gaming, because it is too easy to miss in-game sound and music. 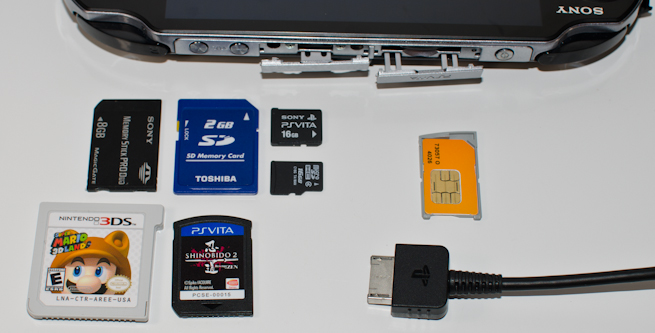 There is also an unmarked connector on the top of the Vita, likely for future hardware attachments. The PSP had a USBMini port, which was later used for a camera in Japan. The Vita has a 3.5mm auxiliary audio jack that supports stereo out but doesn’t support a microphone.

Two storage options are available for Vita owners: the previously mentioned PlayStation Memory cards and physical games. The former comes in four sizes: 4GB, 8GB, 16GB, and 32GB, and ranges from $20-$100. The latter is simply the game cartridge, which can have games saved directly to it. Physical games do not require internal memory to play. Without a PlayStation Memory Card, however, the Vita cannot download from the PlayStation Store or store any data on the Vita.

Furthermore, individual flash cards are attached to individual PlayStation Network accounts. That means users cannot share memory cards with friends, so if you’re sharing a Vita, you must have your own flash memory. Removing the memory card will cause the Vita to reboot. The only way to switch the account on the memory card is to reformat it, thereby deleting all data on it. Because the PlayStation Memory cards can only be used with the Vita, the Vita is the only device that can do this, though data can be backed up to a PC or PS3.

The 3G Vita model (tested, $299) can access HSPA+ networks, which is the faster “4G” that AT&T and T-Mobile tout for most smartphones today. However, the antenna built into the Vita supports 14.4Mbps, half of the maximum on many of today’s smartphones. This limits the overall data speed to 4Mbps down, compared to the more standard 28.8 compatible chips, which generally have data speeds hovering around 8Mbps down.

In my testing around Los Angeles the Vita was able to maintain a strong connection in nearly all areas with 4Mbps down and 1Mbps up. This amount of data speed was consistently more than enough to view Maps data, browse the web, use web-based apps like Near, though online gameplay and Remote Play are restricted to Wi-Fi networks. I tested streaming gaming through OnLive’s service, but it’s doubtful that the Vita would be able to match that same quality with only half the bandwidth.

The Vita is locked to AT&T. I tried using a T-Mobile SIM card, but the Vita listed it as an “invalid SIM” and removed all 3G options from the settings. Removing the SIM will force a reboot.