Considering how powerful the internal components of the Vita are, the browser shouldn’t be nearly as bad as it actually is. The Vita’s browser, to be clear, is one of the worst available on any device manufactured within the last five years. That statement may be generous. With the exception of other portable devices, no browser I’ve ever tested is as slow and frustrating as the Vita’s. 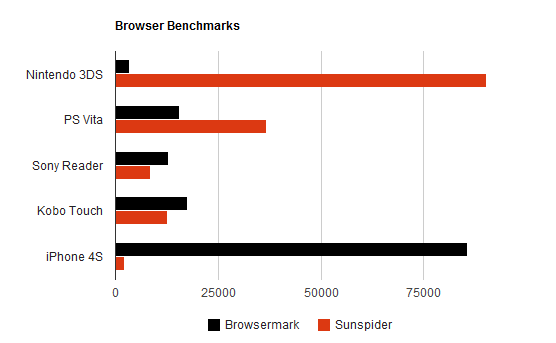 In practical use, the browser is usable but very slow. It loads pages all at once after 5-10 seconds of downloading instead of showing the page immediately, and it doesn’t support Flash or HTML5 video. HTML5 is supported, but by using the browser you wouldn’t know it. HTML5 rich websites are extremely slow and so difficult to navigate that it isn’t worth it. I logged into Gmail and it took five minutes just to open an email, read it, and send a one-line reply. And it couldn’t even do that. Artifacts on the page would randomly disappear or not work, the zoom function would stop working or completely disregard my commands…the browser is a real mess. It’s far easier to use a dumbphone’s browser than this.

The only potential use I can see in the browser is to have easy access to a game guide or something to do with the game you are playing. The problem is multitasking on the Vita is so negligible that the browser can’t be open at the same time as a game. If you’re stuck on a part and want to look up how to defeat that boss or solve that puzzle, the Vita forces users to quit the game to open the browser. That’s not even funny.

As of today, Remote Play is almost entirely useless for gaming on the Vita. The overwhelming majority of PS3 games will not play streaming to the Vita, though the Vita (unlike the PSP) has the controls to do so. This will (hopefully) change in the near future.

Google Maps on the Vita is almost useless because of how slow the service is over a solid 3G (HSPA+) network. Even with the maximum download rate it is so slow that by the time you get traffic details you’ll have been sitting in traffic for five minutes.

Over a Wi-Fi network I had no trouble quickly seeing maps, traffic, and location data. It’s still slow but usable over Wi-Fi. The compass works extremely well, far better than any smartphone I’ve ever tested. Even then, however, I wouldn’t recommend using the Vita for navigation. Driving and using the Vita for navigation is just ludicrous, but if you’re walking down the street and using it for guidance, just tape a note on your back that says, “Steal my Vita!” 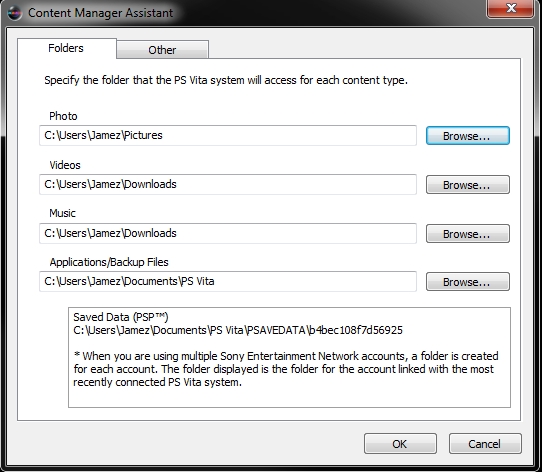 Above: The Content Manager Assistant on the PC is just this and an icon in the user dock

I don’t know how long it’s going to take for a company that isn’t named Apple or Microsoft to figure out content management. Sony clearly doesn’t get it. The current Content Manager is terrible, an awful application that isn’t simple or convenient in any way. The way it works is like this: Plug the Vita into a PC/PS3, and use the Vita to navigate through media you’re interested in transferring through pre-selected folders. If the media isn’t in those folders, unplug the Vita, move the files to those folders, and repeat the process.

Content Software Assistant, the PC application that handles the data transaction, is the worst attempt at data transfer to a device I’ve ever seen. It shows just how terrible Sony can be at building decent software. Transferring music, movies and pictures isn’t worth the trouble of rearranging your data on your computer to meet the requirements of the application. And frankly, being forced to do so just to watch a movie I already own is a travesty.

Sony could have easily remedied this with an actual, honest-to-goodness software application. They did so (eventually) with the PSP. We’re at the point where media we own can be streamed and downloaded wirelessly. Meanwhile, the Vita is stuck in 2005.