Gaming on the Vita is an all around excellent experience. Thanks to very tight controls and that beautiful display, there is no better way to play portable games than on the Vita. 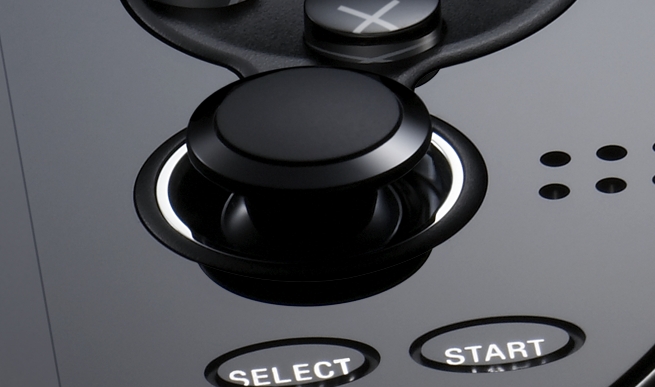 As mentioned in page one, the controls on the Vita are a blend between the DualShock controller and PSP. The feel, however, is entirely different and vastly improved.

The D-pad, which has always been a single solid piece connected under the frame, is now a solid piece that users can feel all the way through. This makes it easier to feel and much easier to switch between opposite directions quickly, though it’s also a tad too small. The face buttons are smaller than on the PSP or DualShock, about the same size as the PSP Go, but also much taller. They click when pressed, which provides much clearer feedback for users than the PSP’s rubberized buttons. The higher-profile buttons are also easier to press.

In fact, all of the buttons have a more mouse-button like feel, where when pressed they click. Not only is that click heard, it’s felt, so players know they pressed the button. Even the start and select buttons, which are more difficult to press because they are sunken into the Vita’s frame, click when pressed. The two shoulder buttons are easy to reach and press, and are practically identical in feel and size to the PSP.

The rear touchpad is both easy to use and misuse. Several launch release titles utilize the rear touch panel, including Super Stardust Delta and Mutant Blobs Attack!!!, and the functionality works well in many ways. However, sometimes it doesn’t. As a button, which Delta uses, the touchpad gets in the way and activates more as an accident than on purpose. The hardware itself is sound, but it will take time for developers to fully realize its potential.

Finally, the analog sticks. They are a huge departure from the PSP’s analog stick design, which was conservative in a way to keep it from breaking. The Vita’s sticks are much more pronounced, and stick out a centimeter off of the Vita’s body. It looks like they can snap off easily, but over the past week of use they have remained not only perfectly intact, but completely functional. I put unreasonable amounts of force on both, pulling and pushing them harder than any game would require (and I do not recommend doing this yourself), and the both analog sticks are completely functional. The Vita itself creaked from the excessive force, but overall the joysticks are stable as a rock. And having that extra height provides a more natural feel when using the analog sticks.

As of this writing, there are 18 games available for purchase on the Vita. Most are not demanding graphically, though some titles like Uncharted: Golden Abyss test the current limits of the console. In my time playing with the Vita I never once encountered slowness in any games tested (12/18 games available), and colleages and friends agree that the Vita is extremely stable and fully capable as a game console. I have found no difficulty with game controls, no slowness while playing individual titles, and no performance drops whatsoever.

However, I have found minor reports of some heavier games experiencing minor performance drops, including Uncharted later in the game. Some PSP titles that are available on the Vita have also reportedly caused the console problems, ranging from slight performance drops to locking the console for nearly 20 minutes. The latter is rare, and I have only found one case of such occurring, though as mentioned above there are some software issues that Sony needs to sort out.

I also tested several PSP games on the Vita, and every one provides an equally good experience. Games take up the full display, though they are pixelated. Unfortunately the list of available games is small, so many PSP games you own may not be available for the Vita. At least not yet. There is no way to transfer UMD games to the Vita either, and Sony has not announced any way to do this in the future.

The Vita has a built-in 2210mAh battery, which is around 500mAh larger than today’s average smartphone. That extra power for the faster processor and significantly larger screen. I’ve tested the battery life on the Vita extensively, though haven’t fully completed my testing. As of press time, the average time of gameplay is about 5.5 hours with 3G off, and about five 5 hours with 3G on.

So far I’m very impressed with the battery life, though the way the Vita handles power is often puzzling. Like most electronics today it has a low-power standby mode, though two times during testing the Vita came out of standby on its own and drained the battery entirely. Once this occurred when in my pocket, and the other time was on my bedstand overnight.

Charging time is exceptional, only an hour and a half from a near-complete discharge (using the included power adapter). However, like the PSP the Vita cannot play games at a certain level of low power, even if it’s immediately plugged in after going into a low-power state. It requires 5-10 minutes of charging before the Vita can be activated again. Some reports have claimed that the Vita does not charge when in-game. This is not true. The Vita will charge the battery whenever plugged in.

My biggest problem with the Vita’s power is the lack of a number percentage of battery life remaining. There is a battery icon that graphically shows how much power is remaining, but there is no indicator anywhere in the Vita that shows how much power actually remains or an estimate of how long before the battery runs out of power.

Continue reading for the conclusion…