What is it like inside a factory that makes Apple iPads? Tuesday night, an ABC Nightline special called “iFactory” gave us the first peak at actual factory working conditions and the people living on the assembly line.

Bill Weir, a reporter for ABC, traveled to Foxconn, a Chinese manufacturing company, soon after the media began taking a closer look at Apple’s assembly line practices. He went along with the Fair Labor Association, which Apple recently invited to audit its facilities in an effort to improve its conditions, or perhaps combat criticism. It also offered to post the audits to its website to keep transparency. Weir notes that Apple paid both to get into the FLA, and also for the audits it will perform, though an FLA employee assures that any “white-washing” will be obvious in the audit report. You can check out its “Supplier Responsibility at Apple” page here. 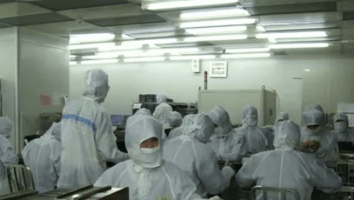 Foxconn is often criticized for its low pay and long hours. Each day, workers must step under protective nets, which adorn the sides of its dormitories due to suicides in the Spring of 2010. In January, dozens of Microsoft Xbox assembly line employees threatened to commit suicide if their working conditions were not improved. After another group of factory workers successfully jumped from the dormitory roofs to their deaths, Foxconn raised its starting salary up 25 cents, and began to offer counseling.

“We didn’t see a cluster effect until, I think, the fifth or the sixth one,” said Louis Woo, a Foxconn executive, on the idea that Foxconn may have a suicide problem.

The worker dormitories, where many of the suicide nets are set up, are an important part of how Foxconn works. When the commute is only minutes, no work time is wasted in travel. When many hours can be worked, more iPads can be shipped. To be fair, this makes good business sense, but the conditions aren’t anything to write home about.

Dormitories hold up to eight people at a time in metal beds. They are small, concrete, and not meant to be enjoyed. Two meals are kept to an hour each day, and workers must travel there in a single line. Mike Daisey described the cafeterias on This American Life as being able to hold 10,000 people, an amount hard to fathom. Work weeks are now capped at 60 hours, a long week in comparison to the average American electronic assembler’s work week of 42 hours, according to Weir.

Shifts at Foxconn are split into two, 12 hour periods. In a day, workers can pump out 300,000 iPad camera modules. An iPad is crafted in five days, with 300 hands touching the product. 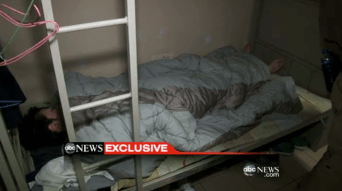 Despite long hours, workers are more than lining up to grab a job at Foxconn — which pays $2 an hour — they’re crowding. The report shows a scene of over three thousand people corralled in front of the factory doors, hoping for the opportunity to be paid by Apple and send money home to families. Foxconn will hire 80 percent of the people who show up, the only requirement is a valid ID card.

The factory seems clean, anti-static gear accessible, and assembly lines efficient. It’s not conditions of dirt that keep some Foxconn employees disgruntled, however, it’s the wages.

The report introduced us to one woman who can afford to visit her family only once a month. She, like many, must leave homes to live at the factory. When asked if she would change anything about the experience, she expresses a need for higher wages, and perhaps benefits from her employer. She is not allowed to join a union. Unions similar to the ones that exist in the U.S. are illegal in China.

“We’re all here to work, naturally we want better pay and benefits,” she said, according to a translation.

Mounting conversations about cheap labor in China and elsewhere is bound to start pressuring companies to raise pay. Apple has already given its factory employees a raise, but after earnings reports that boast $13.06 billion in profit, the company may be pressured to invest more of its $90 billion in cash to its workers.

Would Foxconn want to pay its employees more if Apple supplied the means?

“Why not,” said Woo, speaking to Weir. “That would be good for the employees, and good for China, and good for us because we will have more stable workers who would love to work for our company because they would get paid a lot more than anyone else.”

VentureBeat executive editor Dylan Tweney offers another thought: if you’re upset by factories such as Foxconn’s, don’t just blame Apple, blame yourself. Because for all the gadgets we buy, we are in a way supporting the working conditions in which they were made.

If we can’t resist the gadgets we love, one woman scraping excess material from the 3000 iPad’s apple insignias she handles each shift has a request: “When [you] use it, please use it with care.”