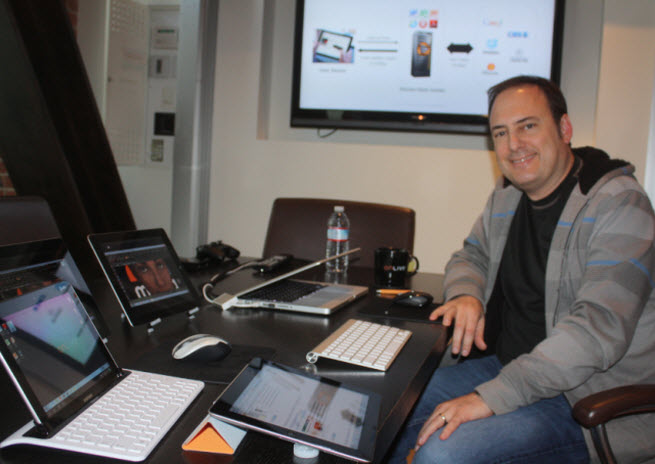 OnLive promised that it would one day run Windows desktop computer apps on an Apple iPad, and today it is delivering on that promise. As an added benefit, it is also launching the world’s fastest web browser on the iPad.

The Palo Alto, Calif.-based OnLive Desktop Plus app is finally available for users to download today, after years of development. The app uses OnLive’s cloud service — which the company also uses to deliver high-end games to low-end computers — to stream desktop apps such as Microsoft Word to the iPad. The paid service is also packaged with an Internet Explorer web browser that can transfer data at 1 gigabit per second, and it can handle Adobe Flash applications, which normally don’t run on an iPad.

A 50-megabyte file from cloud storage can be downloaded in less than a second. I watched that happen today and witnessed Flash games running on the iPad. All of that is due to the technology enabled by OnLive’s breakthroughs in cloud streaming services. The browser connection had a download speed of 459 megabits per second and an upload speed of 204 megabits per second. The ping time (roundtrip time for an internet packet) was 4 milliseconds. That translates into instantaneous web browsing.

“Our whole concept of what we think is possible on the web is going to change,” Steve Perlman, chief executive of OnLive, told VentureBeat. “The important thing is we have a new direction in computing and there are a lot of different directions we can take it. One of the outcomes is a ridiculously fast web browser.”

If it works as billed and catches on (here’s our own review), the cloud service is potentially disruptive to a number of different parties in the documents and web-browsing ecosystem. OnLive has built a robust global cloud, or web-connected data centers, that can operate apps on your device as quickly and responsively as if the apps running in the data centers were actually running on your local device. The cloud computes the app in the cloud and sends video of the results through a broadband network to your machine. OnLive says the cloud works so fast that you won’t notice that the app isn’t running locally. OnLive’s servers can process web pages at speeds of 10 gigabits a second, and the company turns around and sends that to the user at 1 gigabit per second.

OnLive first built that cloud streaming service for video games and launched the network in 2010. Now it has expanded overseas, fielded a “micro console” to play OnLive games on a TV, launched game streaming on wireless devices, and now is adding non-game productivity apps that can run at high speeds on devices that normally don’t have the local processing power to run them. All of that represents a huge amount of engineering work. Mobile salespeople can now use Office apps on an iPad with simple WiFi connections.

OnLive will also deliver lightning fast web browsing, which can actually reduce your usage of data 10-fold or more. That’s because the OnLive version of Internet Explorer only sends the user what’s necessary.

The new service will create yet another revenue stream, in addition to games.

Perlman said the streamed apps aren’t stripped-down Office apps or clones of Microsoft’s software. Rather, they are full-featured, media-rich Windows 7 applications, including Microsoft Word, Excel, and PowerPoint software. That means you can access the full functions of Microsoft Office, reading or creating documents, while on the run.

As we noted earlier, if it really takes off, OnLive Desktop is ultimately a threat to Intel’s consumer microprocessor business, since users will be able to access demanding applications with low-end hardware. They may have no reason to use a high-end PC to access a lot of heavy-duty applications. This phenomenon, envisioned many years ago by people such as Google Chairman Eric Schmidt when he worked for Sun Microsystems, is known as “hollowing out the PC.” It means that heavy-duty internet-connected servers, or the cloud, could reduce the need to have a lot of processing power in a PC. The more powerful the cloud, the less power you need in your PC.

Of course, OnLive will have to outpace Microsoft itself, which is rumored to be working on a version of Office for the iPad.

Perlman started patenting the ideas for this kind of product as far back as 2002. The OnLive Desktop allows you to combine the touch gestures of a tablet with an on-screen Windows keyboard and handwriting recognition. That lets you conveniently view and edit complex documents on a tablet with the same efficiency as if you were editing them on a PC.

While OnLive Desktop and OnLive Desktop Plus target individuals, OnLive is offering another paid version for businesses or power users. OnLive Desktop Pro offers 50 gigabytes of cloud storage, priority access to apps at any time, full-featured accelerated web browsing (at a speed of 10 gigabits a second), and other features for $9.99 a month. OnLive will also have a version for large enterprises. Both services are coming soon, Perlman said.

“It’s been a long [road] to get here,” Perlman said. “It will be interesting to see how people use this technology. It’s a milestone in the industry where people will finally be able to get it. Instant-action cloud computing can do useful things for you, and its more efficient.”