Cloud storage powerhouse Box has updated its Android app with tons of new features. And to celebrate, the company is giving away 50GB of free storage to any Android user who logs in during the next 30 days.

There has been a lot of  movement in the cloud-storage space in the past six months, so Box’s effort to bulk up in mobile aren’t surprising. Apple recently announced it would directly integrate its consumer cloud solution iCloud with its upcoming Mountain Lion Mac OS. Microsoft is also on its way to making its SkyDrive product available everywhere as well as integrating it with Windows 8. Google may also enter the fray with its own Drive cloud-storage service in the next few months. And of course, you’ve got big players like Dropbox, SugarSync, and Amazon Cloud Drive that continue to innovate, too.

Box’s new Android update brings the company full speed into the present with an overhauled user interface, new features, and compatibility with Ice Cream Sandwich, the latest version of the Android OS. The company actually worked with Google to help redesign the user interface with Ice Cream Sandwich in mind, which even users who have an older version of Android will benefit from. New features include the ability to comment on files, add teammates to individual folders, and batch uploads for uploading multiple files at once.

Those concerned about Android fragmentation need not worry too much, as Box supports most older versions of Android. “What’s great is that Box is not a super intensive application,” Box VP of Platform Matthew Self told VentureBeat. “The experience is fairly consistent across all Android devices.”

On top of giving away 50GB of free storage for life for those who login from Android devices, Box will also be giving away 20 Samsung Android tablets to a single company that can compellingly explain how it plans to use Box to improve its daily routines. Two runners-up for the contest will win a Samsung Galaxy Tab.

The new Box Android app is available today in the Android Market, and will soon be available in the Amazon Appstore, Barnes & Noble Nook Store, LG World, and the Verizon Store.

A few more screenshots from the new Box Android app can be viewed here: 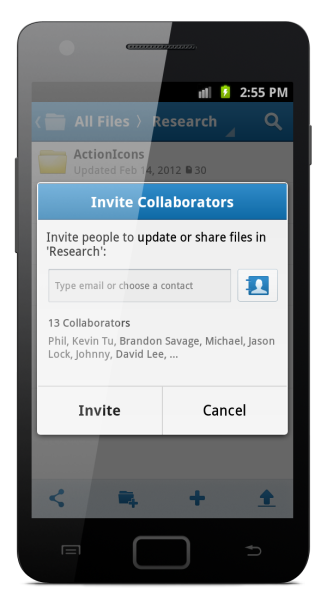 And you can check out a Box-created infographic that describes just how big 50GB is as well: