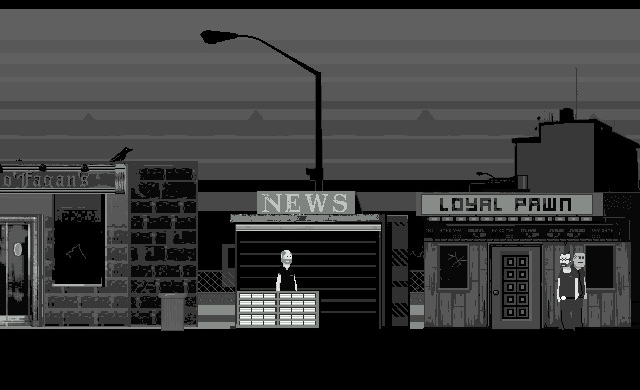 The immediate idea of Cart Life by Richard Hofmeier appears simple enough. At first glance, the game looks like a simple management simulation, complete with setting prices, buying supplies and dealing with customers, and the majority of the game is just that. Take some elements from a game like Fast Food Panic, where the player must accomplish trivial tasks to get an order out, but combine that with a personal, and somewhat darker version of the Sims, wrap it up in retro aesthetics and you have a small taste of what Cart Life is about.

The free version of Cart Life includes the almost-complete game with two of the main characters. The first character arc I embarked on was that on Melanie’s. Her story is that she is a mother in the middle of a divorce. She has some cash and a little bit of time to start a small coffee stand to make revenue allowing her to hopefully get custody of her daughter, or at least get equal time with her. Already, this is some pretty heavy stuff for a foot stand simulator, and already, the player knows they are in for something totally different from normal fare.
The game works quasi-open world, allowing a player to travel to various parts the city, where they can visit shops for supplies, grab a bite to eat, or acquire new equipment. On my first playthrough with Melanie, I didn’t even set up the coffee stand for two in-game days. It was frustrating and somewhat arresting; the things I had to go through to get it up and running. I first had to go to the municipal building where I had to actually take a number and wait. Finally, I was allowed to pay the $300.00 just for the permit to sell coffee just outside. Next, I needed to purchase the physical stand from a machinery shop, which would take another day to deliver. Finally, I had to go to the store and buy supplies. All of this, while I had to juggle Melanie’s personal life with her daughter. I could see their relationship slowly growing detached as the days went on, admittedly from my complete lack of time and effort to spend time with her. Melanie had odd dreams wherein she could not even walk close to her daughter to speak to her. But then she wakes up, ready to sell coffee. 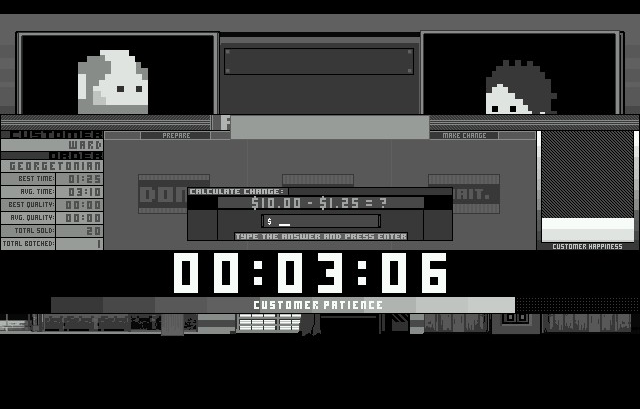 This is where Cart Life got into the actual game bits. Selling coffee is easy, once you get the routine down. You have to go through the motions very precisely, as not to cause impatience to the customer. The actions are done via the arrow keys, having a player hold one direction for a set amount of time, tap back and forth for another, then finally do a bit of easy math to calculate change. That’s it. It’s really quite simple. But then, you have to do the same process over, and over…and over some more.
I can’t say to how deliberate the monotony in Cart Life is, but it is definitely there. Unless you have other ingredients to make other items on the menu, you are doing the same thing again and again. Even when the customer wants a Mocha instead of an Americano, the only difference you have account for is in one of the steps, pour milk and cocoa into the cup, instead of water. A player’s opinion of this part of the game has to stem from how they see the game at all. If a player sees the game as purely a food cart sim, that’s no problem, and there is plenty in the game to accommodate that. However, it is easy to view this game as a story-telling medium, with simulation elements there to merely represent the grind of daily life. I haven’t tried it yet, but I am curious what would happen if I never bought a cart, or a permit, or anything. If I had just used the initial money to just buy a snack every once in a while and go to sleep at the end of the day while having done nothing the entire day, how would the game react. It’s tough to really know because [SPOILER WARNING] Melanie’s story ends exactly where I thought it was just beginning to excel or at least change dramatically. The divorce hearing was about to commence, but then the credits rolled. It suddenly made me wonder what the game was really about. What was the point of the coffee stand simulation when it all ends so suddenly? I never had the time or cash to buy upgrades, or paint the stand, or sell better items.
Maybe that’s the message though, however much of a downer it may look. In this deceptively grim version of the world, it doesn’t always work out the way you hoped. Maybe you got the cart up and running and had it make some profits for a little while, but in the end, was it enough? Will it ever be enough? I could imagine some players trying to perfect a Melanie playthrough, trying to have her come out on top, to keep her going and always getting to the same end. 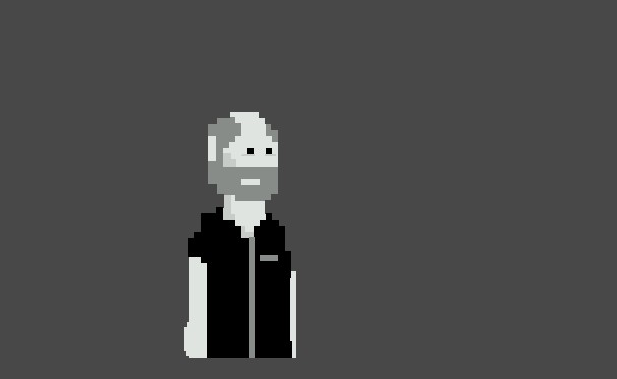 But lo! There is another character in the free version of the game, and he is the rhetorical flip-side of Melanie. His name his Andrus Poder. He is a cigarette addicted immigrant, and he has come to America to sell newspapers. Andrus is also the more interesting character of the two, and his story doesn’t seem to need to force feed emotion like Melanie’s. He is a simple man with simple needs, and craves a simple life.
Andrus’s game is also a lot easier to get started. In the opening scene, he arrives on a train, immediately visits his newspaper stand, then purchases it complete with permit and contract from the local paper. Easy peazy, right? A place to live is just as conveniant at a nearby motel. The grumpy owner only requires $119.00 a week, every Monday. Simple. Well, I also have to renew the newspaper contract every Friday for $35.00. Alright, but I also can’t forget to buy cigarettes for Andrus, or else he gets a wicked cough. Then I also need to buy his cat vittles. Oh, and I can’t forget to stop by the municipal building to speak to some lady about the permit or something. I guess one can never really have a truly simple life.
Andrus not only has a better story, but his gameplay seems to fall in line with the simulation of the game a lot more. You start of with twenty newspapers everyday, that you must fold and stack through a typing mini-game. Then you just wait, talk to customers, learn names, quirks and other nonsense, and sell papers. I soon find that some people would also like coffee as well. That’s an interesting notion. I head down to the super market and see that a coffee pot is about $40. That’s disappointing as I only have maybe $80 dollars left, and I am not making a huge profit from the papers. I am going to need money for rent and the contract to even sell the papers. Coffee seems out of my reach for a while.
It goes on like this for a while. Andrus goes to sleep every night after feeding his cat, and has strange and vivid dreams about obscure things. He goes to the stand every day, after eating a meager breakfast, sells all of his newspapers, which are obscenely overpriced just to make enough money for the weekly dues. Slowly, he gets enough money for a coffee pot, and begins to sell coffee along with the papers, and the cycle continues.
Again, there is a message. The cart vendors won’t give up just because they seem down. They keep selling.
The cart life grinds on.

There is a third character in the paid, five-dollar version of the game. The bagel vendor Vinny is perhaps the oddest of the trio. His main objective is to pay the rent for an apartment he’s using for the month. I’m not sure what the rest of his story is, except that he seems to know a few townsfolk quite personally. Vinny is also addicted to coffee, even allowing him to move faster when he drinks it, and I’m pretty sure that he doesn’t actually sleep in the game, but I could be wrong. The biggest difference to the other characters his is recipe mechanic. He has a small book in his inventory full of scribbled down recipes for various bagels and spreads. The player needs supplies from the store, and in the apartment kitchen they have to combine the exact amount of ingredients, then mix or bake or boil the concoction. I haven’t played as Vinny, but I do know that he can move his cart just about anywhere and set up shop. While this is neat, I can only assume he doesn’t have a permit and will probably be immediately fined by the one cop that patrols around. Vinny seemingly is the most gameplay oriented of the three characters, and is probably best suited for a player looking for a real food cart sim.
It’s hard to say exactly what this game is though, or whether it’s trying to achieve simple, effective storytelling or is trying to be a legitimate management simulation. Why can’t it be both? The look and sounds are evocative of old school Atari or Commodore games, and while those seem upbeat and cartoony, the world is drab and devoid of color or much of a personality aside from various character quirks. The game will get inside your head one way or another, because it throws your expectations at every turn. Players looking for one thing will probably come out with a totally different experience. It plays on the dichotomy exceedingly, and does so with out remorse. Like most good games, Cart Life gives you an experience more than anything.