Copy and paste is for squares. The future of search on Android-powered mobile devices will be all about circles, if a recently filed patent by Google is any indication.

Google has invented a new way to search on touchscreens with a functionality it calls “continuous gestures,” according to a patent discovered and dissected by Patently Apple. In essence, continuous gestures will let you simply circle content such as text, photos, and videos to search Google or other sites.

A continuous gesture is a two-part action that starts with the user drawing a “g,” or another letter, to indicate a desired activity, and then continuing the movement by lassoing content to be acted on. So you would draw a “g” to indicate a desired Google search and then continue the gesture by circling the content you wanted to search. Drawing another letter, say a “w,” would perform a different action — in this case a Wikipedia search.

The patent also includes specifications for handling ambiguous drawings (of which, we’re sure they’ll be many) and multi-content searches. “If a user has a news article open that displays the words ‘restaurant’ and ‘Thai food’ and a map of New York City, a user may, via a series of continuous gestures cause a search to be performed on the phrase ‘Thai food restaurant New York City,'” Patently Apple explained.

The Google patent was filed in the third quarter of 2011 and was recently published by the United States Patent and Trademark Office, according to the patent blog.

No word from Google on if and when the company plans to implement these intriguing search concepts.

“We file patent applications on a variety of ideas that our employees come up with. Some of those ideas later mature into real products or services, some don’t,” a Google representative told VentureBeat. “Prospective product announcements should not necessarily be inferred from our patent applications.” 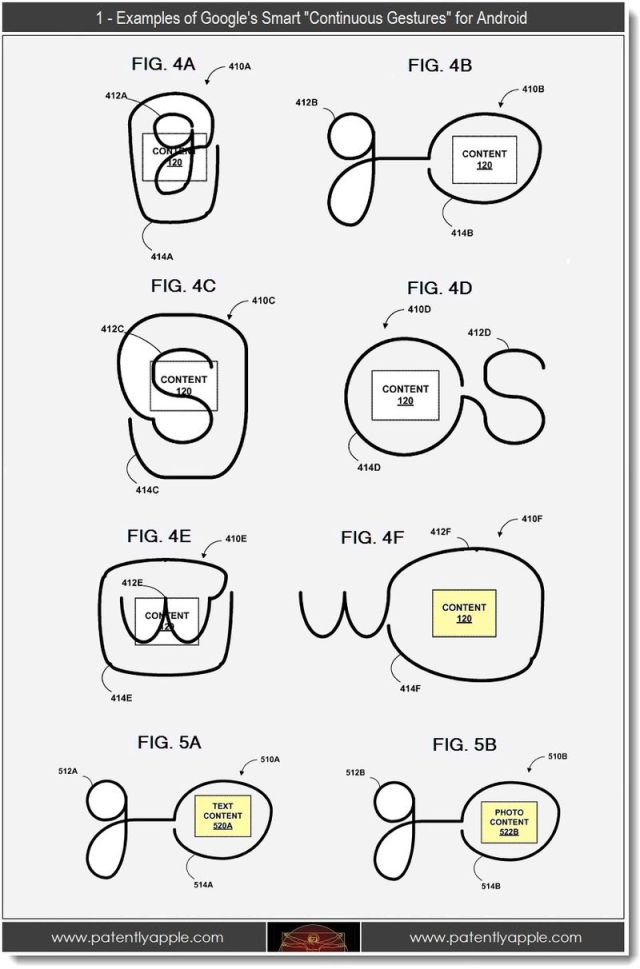