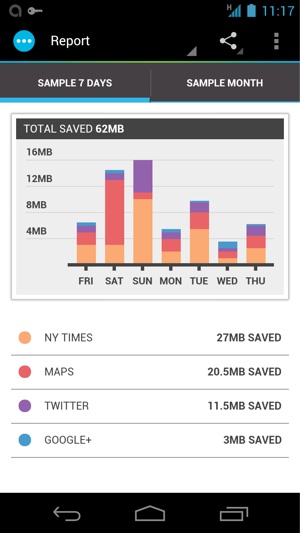 Onavo has had something of a split personality for the past year. The company’s iPhone app has won countless awards for its revolutionary data compression capability (including top prize at our MobileBeat 2011 conference), but Android users had to make do with an entirely different Onavo app that helped them keep track of their mobile data.

All of that changes on Monday with the launch of Onavo Extend, a free new Android app that brings Onavo’s data compression technology to Android 4.0 “Ice Cream Sandwich” smartphones and tablets. Now Android users will be able to shave precious megabytes off of their wireless bills, which will be particularly useful when roaming.

Onavo Extend won’t replace the company’s existing Android app, CEO Guy Rosen told VentureBeat in an interview, which makes sense, since it only works on newer Android devices. Rosen tells me that Ice Cream Sandwich added new features in its VPN API that made it possible to bring over the compression feature. The iPhone, on the other hand, was able to support Onavo’s technology from the start.

Just like with its iPhone app, Onavo Extend requires you only to turn on its compression capabilities, after which it will seamlessly slim down your data without any more tweaking. You can expect push notifications to alert you of just how much data the app is saving, something that has driven the popularity of Onavo’s iPhone app.

The company’s initial Android app also has a crowdsourced engine that keeps track of apps that hog data. Rosen previously said he hopes to bring over that capability to Apple’s platform eventually.