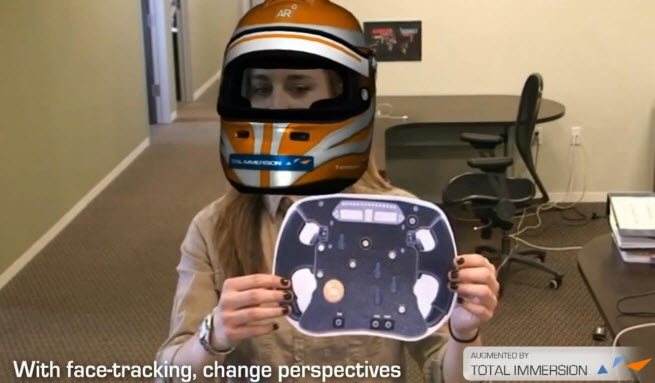 Total Immersion is releasing a new racing game demo that shows off the tools developers can use to create augmented reality games.

With the D’Fusion tools, developers can create games such as a racing titles that exploit a computer’s webcam to superimpose a helmet on your face. And you can use a faux steering wheel — which you hold in front of the webcam — to drive your car. So your gestures make you feel as if you’re driving on a race track on the screen.

For more than 12 years, the Paris-based company — a veteran of the DEMO conferences in 2004 and 2007 — has been delivering augmented reality experiences like this to developers, who in turn can launch games for consumers.

Bruno Uzzan, chief executive of Total Immersion, said in an interview that the new D’Fusion tools enable immersive new applications in augmented reality that can be integrated with Unity Technologies’ 3D game engine.

“Augmented reality is gaining a lot of momentum, from marketing advertisements to integrations with toys,” Uzzan said. “We’re using state of the art computer vision to track faces and detect movements that can deliver much more immersive gaming experiences. Our goal is to bring augmented reality to everyone.”

To create the racing game, the company had to develop much better face-tracking technology than it had before. The inputs from that system had to be integrated into the graphics rendering engine created by Unity. Total Immersion will show off the latest D’Fusion for Unity technology at the Game Developers Conference in San Francisco next week. The Total Immersion AR Formula 1 game will run on an Intel Ultrabook, which has both gesture detection and a webcam that can track faces.

Total Immersion now has more than 6,000 developers using its D’Fusion platform, and it has more than 100 partners around the world.

The company has raised $12 million in three rounds and became profitable in 2010. More than 1,300 projects — including an interactive Tic Tac-branded billboard in times Square — have been released in the past two years. Total Immersion has 90 employees. Uzzan co-founded the company with Valentin Lefevre in 1999.

Check out the demo of the Total Immersion AR Formula 1 racing game below.