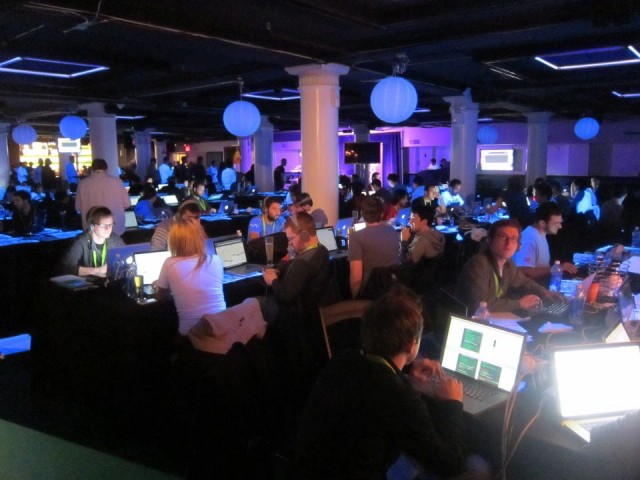 VentureBeat spent some time this weekend at the Spotify music apps hackathon, 48 hours of coding, ping pong and pizza in New York. It was an interesting chance to see what is possible on Spotify’s platform, and we picked up some useful gossip along the way. According to two sources we chatted with, Spotify is hoping to open up its App Store, which currently has only ten hand-picked partners, to all third party developers by the end of March.

The event was held in partnership with the global advertising giant OMD, which brought big brands like McDonalds, Doritos, and Mountain Dew into the mix. That meant a lot of prize money, and hackers responded, travelling from as far away as Australia and Pakistan to attend the 48 hour event.

The big winner was Swarm, an app created by Peter Watts, which picked up the $10,000 grand prize. The app made it simple to add a list of friends and then pull in their music activity from Facebook and other sources, generating a dynamic playlist in Spotify of what your friends were listening to that day.

“Spotify is an incredible platform in certain ways,” Watts told VentureBeat. “Everything happens inside their player, so you don’t have the problem of discovery that you do when trying to start a web app from scratch. There are ten million people who end up inside the Spotify client every month and for early apps, before the marketplace is crowded, that is a golden opportunity. And because they are already Spotify members, you don’t have issues like you might with R.dio, where people find your web app, but then need to register or log-in and lose interest.”

Watts says that there is definitely room for improvement in terms of making the platform flexible and developer friendly, “But that is the point of having a hackathon, to work out those kinks.” For someone who has been working on music apps for the last five years, Watts says Spotify solves the two main challenges. “It gives you access to people’s taste graph and solves the hassle of licensing.”

It’s unclear yet how apps on the Spotify platform will monetize. That may be part of why OMD and big commercial brands were invited, to try and connect independent developers with a revenue stream through partnerships. “We think this is a pretty new approach, bringing in brands to work directly with developers during a hackathon,” said Jeff Levick, Spotify’s chief advertising officer. “This weekend was all about having fun and exploring the possibilities, but at the end of the day people need to get paid.”