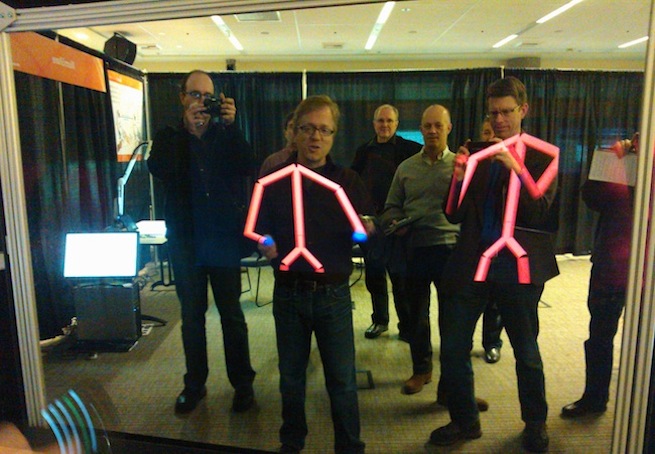 When you combine the technology behind motion-sensor device Kinect, Windows Phone software, and a mirror, you get Microsoft’s Holoflector — a creation that looks like it belongs in a sci-fi movie.

Basically, Holoflector is a unique, interactive augmented-reality mirror that the company presented yesterday at its TechForum 2012 event. Walking in front of the mirror will prompt superimposed graphics to display where your reflection should be, as demonstrated in the video embedded below. The technology also uses both Kinect and the location of a Windows Phone device to track your movements in conjunction with the graphics, which can produce some pretty cool imagery.

For instance, Microsoft Principle Researcher Andy Wilson demonstrates how you can make a tiny holographic image of yourself hover about the position of your phone’s screen. You can even “grab” the holo-image with your other hand to control its movements. (Personally, I would have gone with something more practical, like a sonic screwdriver.)

I’m assuming that this technology can eventually be altered to superimpose the likeness of someone else onto your reflection. Imagine looking into a mirror and seeing Abe Lincoln, Batman, or a zombie staring back at you. And while it might be years before we see a consumer product based on Microsoft’s Holoflector project, it’s still worth checking out now. Let us know what you think of the video demo in the comments.