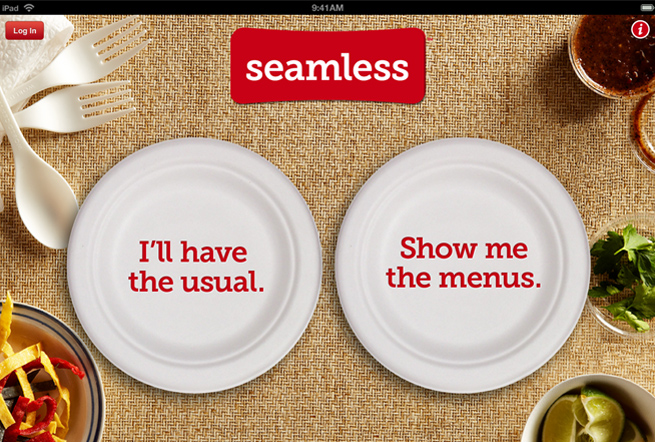 Online food-ordering company Seamless has brought its ordering and menus to the iPad today — a move that hungry couch potatoes will likely applaud.

Seamless currently competes with smaller-but-still-potent startup GrubHub for online delivery and pickup order supremacy. Seamless’ last big move was acquiring MenuPages for New York Media so it could add 35,000 menus and 175,000 user-generated restaurant reviews to its data base.

Seamless CEO Jonathan Zabusky told VentureBeat that the company decided to launch an iPad app because it’s seeing increasing traffic from mobile apps, with 25 percent of order volume now coming from mobile alone. But when you add the iPad in the mix and you have to think a little different, he said.

“The iPad is part of a multi-platform approach,” Zabusky said. “Seventy percent of iPad usage is from home, so we’ve added a greatest emphasis on discovery.”

The iPad application is set up so that after you login, it takes you to a screen featuring two plates with the text that reads: “I’ll have the usual” and “Show me the menus.” The first plate takes you to restaurants you’ve ordered from in the past as well as the most popular choices in your area. The second plate option allows you to look at menus and high-definition photos of restaurant cuisine you haven’t tried.

“Customers wanted photos and menus to be more prominent,” Zabusky said. “We especially wanted to bring photos to life.”

The iPad app will also feature more social functionality than the iPhone, BlackBerry, and Android apps, including the ability to rate restaurants and “like” menu items. Zabusky believes iPad users will spend more time using the app than they would the phone versions. So, it was a priority to have some extra functionality.

New York-based Seamless now serves 12 U.S. major metropolitan areas. It has processed more than $1.5 billion in sales since 2004 and completed more than $400 million in sales in 2011. Seamless generates revenue by taking a cut from each food purchase made through its service — the company keeps a 10 percent commission on average.

You can view a gallery of Seamless for iPad photos below: