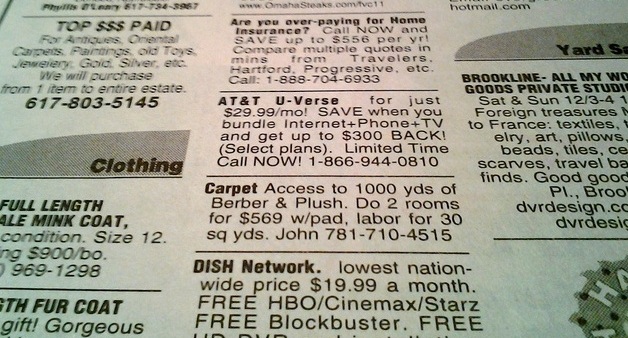 As more advertising dollars move online, publishers and marketers are finding themselves in a new world. We’re moving from scarcity of information and distribution to abundance.

Take Yellow Pages. In the scarcity model, a free listing was a name and a phone number in tiny type. Publishers could charge for things like bold face listings, a color headline, a box around your listing, photos, a tagline about your business, and additional text such as hours of operation.

With the abundance model, publishers like Yelp and Google give away many of these kinds of  features with the expectation that providing better information for consumers will draw more visitors. Businesses can upload photos and hours and describe some of their key features — all for free. Google even goes so far as to pay for a photographer to take pictures of the insides of selected businesses. As much as I’ve criticized Yelp’s paid ad products lately, I think their free products are terrific.

Part of this trend has been driven by the desire to build the right products; ones that fit the needs of consumers. I started in the online newspaper business. The print paper ran a movie-showtimes directory that listed all of the movies playing — organized by the name of the movie theater chain (such as AMC, Cinemark, Regal). It was completely user unfriendly; people search for movies by title or by the theater near them. But organizing it by chain made it easy for someone in the ad department to take a ruler, figure out how many column inches each chain took up, and bill them appropriately.

When we moved this online, we wanted to make it user friendly. We let people search by title or their local theater. By taking ads and chopping it up into data, we took what had been ad inventory and destroyed its advertising value.

Even something as simple as a proximity sort reduces the value of advertising. Why would someone drive 10 miles to an advertiser when there’s a comparable business 5 miles away?

The bar for what’s free and what’s paid keeps moving — and advertisers keep getting more for free. Is a movie trailer content or advertising? In the traditional scarcity-based model, it’s been advertising that studios have paid for. Now, it’s considered content in many cases. A movie reviews site that didn’t include links to trailers would feel incomplete. Super Bowl ads that advertisers pay more than $3 million to air during the game transform into content that streams for free on YouTube. Since 2000, the inflation-adjusted value of newspaper classified advertising in the U.S. has dropped 77%. But online classifieds site Craigslist didn’t get most of that money — a lot of what used to be paid for became free.

Another important trend is that marketers are now having conversations with consumers, instead of simply talking at them. Twitter, Facebook and Google+ all let consumers connect with brands for free. With Google+, some marketers who participate get a big space on the righthand side of Google’s main search results — that’s some nice beachfront real estate. Yelp allows business owners to respond to reviews for free.

Better marketers like Starwood Hotels, American Express, The North Face, and Virgin America, use these tools to highlight their brands in ways that no traditional media can.

Starwood, which includes brands such as St. Regis, W Hotels, and Westin, has long been a pioneer in using social media to interact with consumers. Well before Facebook and Twitter existed, Starwood unleashed the Starwood Lurker onto travel-geek site Flyertalk. (His profile says he’s been a member since 2000.)

The Lurker (William Sanders in real life) answers questions about promotions, helps travelers resolve issues with hotels, and generally serves as a goodwill ambassador to high-value travelers. For all of the value created to Starwood from this, Starwood pays Flyertalk nothing. Sanders has developed a cult following among hotel geeks. (I skipped out on a party at SXSW one year to have drinks with him.)

“We have tried to leverage the same principles and lessons learned from Starwood’s award-winning lurker program, which was early days for us in terms of digital interaction through message boards, and apply them to new social channels, such as Facebook and Twitter,” said Abbey Reider, Director of Social Media Strategy for Starwood.

This also extends to personal brands like Justin Bieber, Ashton Kutcher, and Britney Spears. Twitter and Facebook provide them channels to reach millions of their fans for free.

Of course, the platforms also benefit from this. Celebrities and brands drive awareness of the platform. Twitter was undoubtedly helped by the race to get 1 million followers between Ashton Kutcher and CNN.

But these freebies mean that startups need to come up with more creative ways to build value for advertisers.

Take question-and-answer site Quora. So far, the company hasn’t allowed brands to participate as brands on the site. Is it better for Quora to charge brands to answer questions, or should the brands be allowed to participate at no charge, with some other monetization scheme? Some brands would pay, but charging would mean that Quora’s knowledge base would be less complete.

Quora is taking a decidely Silicon Valley approach to figuring out how to balance free against paid. It is experimenting with Credits, a virtual currency that can be earned by providing high-quality answers and spent to promote answers or to get people to look at questions. Brands could potentially answer questions for free (thereby making the knowledge base complete for those seeking the information) and then pay to promote those answers to people who might not have seen them.

And they can buy the virtual currency they need with real currency.