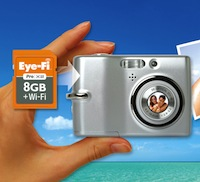 Eye-Fi, a company that produces wireless-transmitting memory cards for cameras and tablets, announced today it has raised $20 million in its fourth round of funding.

The company makes SD memory cards that can transmit photos and other stored data wirelessly between cameras, tablets, and computers. The card uses Wi-Fi to share pictures without needing to take a memory card out of one device and plug it into another. Eye-Fi cards are especially helpful when you want to share pictures you took with your digital camera on-the-go with a smartphone. You can transfer the file to your phone and then upload it to all social networks you belong to.

Eye-Fi was the first on the scene, but other companies have followed suit. Toshiba’s FlashAir card will be available this year and Panasonic is developing a similar WiGig supported SD card, which will transit files at gigabit speed over short distances.

The company also announced a partnership with Japanese mobile operator NTT Docomo, which also served as the lead investor in this fundraising. The partnerships includes plans to integrate Eye-Fi technology with the carrier’s personal cloud system. NTT Docomo customers will be able to send photos they take to their phones and share them with social networks.

Eye-Fi is using the funding to add Michele Don Durbin, a former Skype and eBay exec, to the team as vice president of marketing.

Eye-Fi was founded in 2005 and is based in Mountain View California. The company has been funded by Opus Capital, Shasta Ventures and TransLink Capital and has raised more than $40 million.