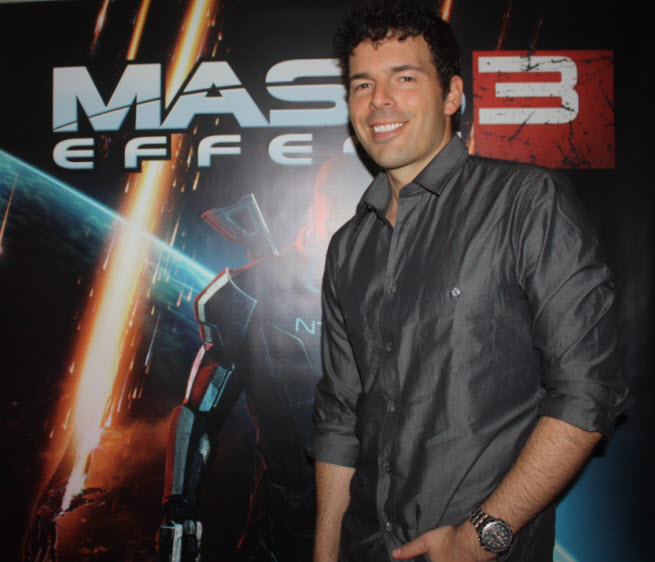 Casey Hudson‘s star is shining bright as the launch of his team’s epic sci-fi video game, Mass Effect 3, draws near. He is the executive producer of one of the biggest video games of the year in a series that has already sold millions of units. On March 6, Electronic Arts will publish the BioWare-produced game after a couple of years of development.

But not everything has been easy. It’s been an epic undertaking with 150 people working on the game. And fans have become distracted by the controversy over downloadable content dubbed “From Ashes.” That new content, which includes a powerful new character, could have been included in the game for free. But as DLC, fans will have to pay for it. It is a free for anyone who buys the more expensive limited edition of Mass Effect 3, but it will cost $10 for everyone else. Fans aren’t so happy about that.

But Hudson believes that controversy will blow over as fans get their hands on the game and find out what happens to their favorite characters. Here’s an edited transcript of our interview with Hudson.

Gamesbeat: So, do you feel good to be where you are now?

Casey Hudson: It does, yeah. I think we’ve done everything we wanted to do with the series, and that people are going to get what they want out of Mass Effect 3.

GB: What’s your own postmortem at this point? Your feelings on how it turned out.

CH: You know, I think we had a lot of ambitious goals for the whole series, and for Mass Effect 3 itself. I’m just really impressed with how the team came through, and I think for fans, they’re going to get all the things they’re looking for out of the experience. I think there’s a lot of excitement and a lot of anxiety. Fans want to make sure that they see things resolved, they want to get some closure, a great ending. I think they’re going to get that.

GB: What has been interesting to you about all the fan commentary so far?

GB: It sounds like Kinect voice commands have worked out reasonably well. I played it at CES, it worked fine for me.

CH: Yeah, it actually is a useful function, being able to use your voice to do things that the character in the game uses his voice for. Speaking to other squad members, having conversations. Because we limited it to that, and it’s a very intuitive way to speak to people, using your voice, it’s actually a really intuitive part of the game. When you think about it, it’s actually pressing buttons in order to speak that’s the weird thing. Being able to use your voice to talk is a lot more natural.

GB: There was one review that kinda leaked out, and I was wondering if the basics of the information were accurate. Like… It’s about 20 hours of game to play, and maybe about 40 hours if you really explore everything?

CH: That sounds like it’s roughly accurate. We think it’s probably bigger than Mass Effect 2 in terms of size. Very, very replayable, so even if you did that extended playthrough, all of those things are going to be different if you had different playthroughs, different characters are alive, all that kind of stuff.

GB: And then maybe 90 minutes of cinematics?

CH: Yeah, I think it’s somewhere around there. It depends on how you count it. Much of the cinematics happen live during gameplay, in the game engine.

GB: That was worth stepping up, from your point of view? The cinematics help tell the story?

CH: Yeah. And like I say, so much of the cinematic parts are still during some sort of controllable gameplay, whether it’s a brief moment of cinematic action that leads back into gameplay afterwards… We’ve put a lot of the cinematic storytelling into moment-to-moment action. So Commander Shepard will step on a bridge, it explodesd and you go sliding down the side. We do a lot of redirects, where you see a hallway and you think you know where you’re going, but before you get there, other things change and the hallway breaks down, and you’re forced down a different path. A lot of these things are done cinematically, live in the game engine.

GB: Some of the fans are getting up in arms about the day one downloadable content (DLC). That’s the topic of the day, I guess?

CH: As a fan, some people fear the worst, and they put their own spin on what they think is happening. As a fan, if I believed those things I’d be worried too, because what some people are saying is that we’ve taken all of the lore of Mass Effect out of Mass Effect 3 and it’s only in the DLC, stuff like that. Of course that’s not true. In fact, Mass Effect 3 is all about answering all the biggest questions in the lore, learning about the mysteries and the Protheans and the Reapers, being able to decide for yourself how all of these things come to an end. The DLC, whether it’s day one or not, is always going to be sugar on top, the extra… You know, the extra little bits of content that tell side stories. So even though the character we’re releasing on day one is a Prothean, which is part of a race that’s important to the lore of Mass Effect, his story is still an interesting kind of side thing, and then you get this character that’s good if you want to have him for your first playthrough. But it’s always optional. We would never take stuff out of the core game and only have it in DLC.

GB: And then, for the purposes of those fans, can you explain some of the decisions that you’re making there, to do that?

CH: Sure. What a lot of people don’t know is that… We’ve got 150 people who worked on the Mass Effect game. When we get towards the end of the project, we get into the certification phase, and everything that we’ve ever wanted to do with the core game is actually finished. And now we just need to get it certified and put on the trucks and manufactured on discs and stuff. That takes three months or more. Three months or more for a team of 150 people, that equates to millions of dollars of development time. So we either would move on to the next game, which you might not see for several years, or we’re a multi-team studio, so they might move on to Dragon Age or The Old Republic. But we know that people really enjoyed the DLC for Mass Effect 2. So we wanted to start working on DLC.

GB: You finished it too early?

CH: We finished it too early. The team actually worked extra hard so that you would have the option of playing it in your first playthrough.

GB: Does it feel a little weird, though, to work on this for two or three years and then have the first thing that comes up be the DLC controversy?

CH: Well, I mean, it’s been a bumpy road throughout. We’ve had lots of interesting things happen through the course of development. And again, I think it just comes back to the fact that… There are lots of fans who are super excited, and understandably, they’re really worried about whether they’re going to get the full experience that they want and the ending that they want. And so we just need people to get to March 6 and be able to play it. Then they’ll realize that we’ve put our hearts and souls into making this game everything that the fans want it to be.

GB: After it ships the conversation can shift to more interesting things.

CH: It’ll probably shift to something else, but I think there will be a lot more appreciation for the fact that we love games, we love the Mass Effect universe ourselves, and we love our fans. We want to make sure that they get what they want out of it.

GB: So are you guys the creators or the stewards of the franchise?

CH: Um… You know, at this point, I think we’re co-creators with the fans. We use a lot of feedback.

GB: Is there something that comes to mind there, examples of that, where fans made a difference in how it turned out?

CH: When we started the Mass Effect series, we had no way to tell how compelling our characters would be in terms of the emotions… Especially with the aliens, we didn’t know if they would be able to portray compelling human emotion. So we didn’t build the love interests into some of the alien characters like Garrus… He has the exoskeleton face and stuff like that. But because a character like Garrus just has great voice acting and animation, and a personality that’s really well-written, a lot of people wanted romances with him and with some of the other alien characters. So we decided to try that with Mass Effect 2 and that was very successful. They’re some of the most popular romances, people love those characters. That was a surprise to us, but we kind of had to finish Mass Effect one and then listen to some feedback before we tried incorporating that.

GB: Were there any things you view as having…”fixed,” so to speak, when you moved from Mass Effect 2 to Mass Effect 3? Improvements that really make a big difference?

CH: Yeah. The overall gameplay has really come full circle. Commander Shepard is now really fluid in how you move around, get over cover, you can grab enemies, it’s very physical and visceral. Jumping and falling, you just have so many things you can do. But in addition to the action side, we also took a lot of feedback about how Mass Effect 2. It was a very valid point, that there was progression, but not a lot of intelligent decision-making about how you were progressing. And so we’ve added a lot of depth and decision-making into every step of progression, whether it’s your powers, deciding which kind of flavor you want at every stage. Every piece of your armor has stats on it, so that you can decide how you look, obviously, but each piece is also helping you optimize your gameplay towards a certain style. The same thing with your weapon. Now you literally see your weapon on a bench, you’re plugging in and out different mods that really help you play the way you want to play. You might choose entirely different things on one playthrough versus another because you’re actually making intelligent choices about how you combine all of these things.

GB: So then… Because the series was so successful, were you able to really ratchet the budget and the team and all that? Would that not have happened if it was a little bit less of a success?

CH: Well, I think one of the really difficult things in games is just getting them finished. Getting them through a greenlight process, getting them finished and shipped. To be able to do that three times in a row, as part of a plan to make three games, it is pretty amazing. And most importantly, it allowed us to finish that vision, to deliver it as a really great package of three games for players.

CH: We’re really excited ourselves to get to the launch date and let people play it. I’m really looking forward to hearing people’s stories, because when people compare notes. There are so many different paths. The watercooler talk is a lot of fun. So many different things happen from one playthrough to another.