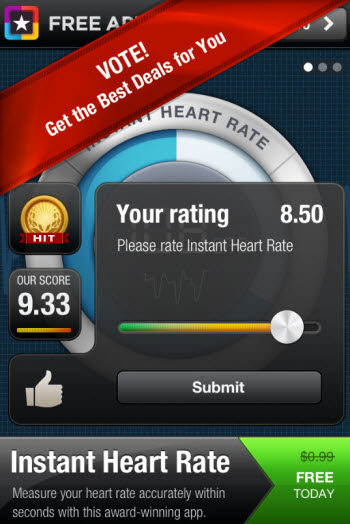 Discovery is still a huge problem on the Apple App Store, with 578,716 active apps and no sure-fire way to stand out. Iddiction hopes to tackle this problem with its App-o-Day promotional app.

Making one app to promote another app may not sound like much of a solution. But Iddiction founder Andrej Nabergoj thinks he has a way to help indie developers stand out. He sees the solution as a daily deal, or a Groupon for apps, gaining consumers by the day.

Nabergoj said in an interview with VentureBeat that App-o-Day will curate its recommendations, highlighting only one app per day. In doing so, it hopes to lure consumers back to get the best, coolest and newest apps and games for free on a daily basis, much like existing sites such as FreeAppaDay or App King.

To set itself apart, Iddiction has created an attractive user interface that is clean and relatively simple. It has a rating score and allows consumers to give their own ratings. And Nabergoj says his team works hard to find only the best apps.

“We don’t give you bugs or scams,” Nabergoj told VentureBeat. “We find the best. We’re interested in showcasing the hard-to-find, the up-and-comers, the unexpected. In this case, traditional marketing channels don’t make sense.”

“We looked to Groupon and focused on the daily deal mechanic and thought that it could be brought to the App Store,” he added. “We thought about how Apple would approach this if they did it.”

The app provides new selections straight to your iOS device, where you can download the apps for free.

A number of developers are already participating, including indie app makers Azumio and Appty. Nabergoj says the first month is already booked and the company has more than 1,000 apps already under consideration. Many of those will be paid apps that will be available for free for a day.

This kind of daily deal makes sense for developers because they can get a huge influx of users. Those users will share the app with their friends, who may come back the next day and discover they have to pay for the app. Since their friends are using it, they may be more willing to pay. 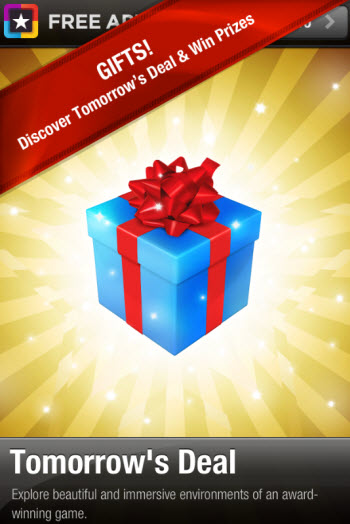 “The App Store itself is the best place to discover and download new apps.  But we take it to the next level — giving consumers a very focused and convenient way to find fresh new apps or games, and giving independent developers a new platform to promote their handiwork,” added Nabergoj.

Nabergoj is hoping for another big hit with the new startup. Previously, he was the chief executive of Outfit7, which struck gold with the Talking Tom app, prompting the Talking Friends series of silly-sounding voice apps that have been downloaded more than 300 million times.

While in his previous job, Nabergoj said it was always a mystery as to why some apps became so successful while many others failed. He studied the problem and found people don’t search for apps, they find out about apps from friends.

The Palo Alto, Calif.-based company was founded last October and it got its $3.5 million funding in November. Now it has 15 employees.

Of course, it’s possible that Apple may try to do the same thing. Indeed, Apple itself is aware of the problem of discovery and that may be why it recently bought Chomp. But Nabergoj said his company will keep evolving its service to stay ahead.

Nabergoj thinks that App-o-day is especially relevant because advertising isn’t serving developers well. The cost of acquiring new users is rising and in some cases is higher than the value created by those users. Some developers are becoming desperate and turning to paid third-party marketing services that guarantee placement in the top app rankings. Apple recently cracked down on those services for manipulating its rankings. Nabergoj thinks the competition from such services is a short-term problem, as Apple clamps down on it.

Iddiction will focus on games, health, education apps and others.

Disclaimer: Aydin Senkut is an investor in VentureBeat.