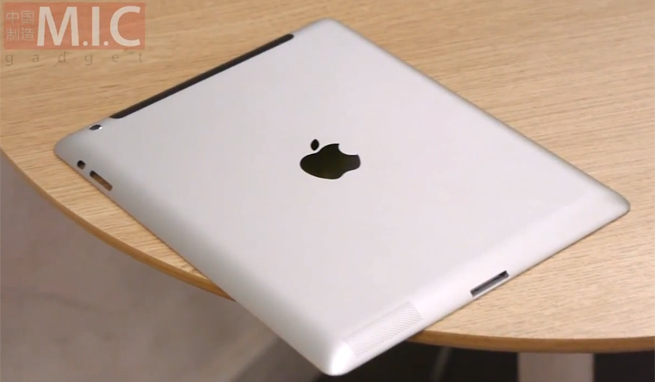 Ahead of a much-anticipated launch on Wednesday, a Chinese blog has constructed a partial Apple iPad 3 from supplier parts and learned a few new tidbits about the upcoming device.

Apple’s iPad 3 event on Wednesday promises to be a much-watched event for the company. The rumor mill has been in full force concerning the new device, with reports suggesting the iPad 3 will be slightly thicker and will include a higher-resolution Retina Display, better cameras, and the inclusion of LTE 4G chips. Other rumors suggest the unit will offer a new quad-core A6 processor to replace the iPad 2′s dual-core A5 chip, which will make processing high-end games and apps much smoother.

Now several of those rumors appear verified somewhat by a new report and video by M.I.C. Gadget. This Chinese blog has partially constructed an iPad 3 with what it claims are authentic supplier parts, including front glass, rear shell, and plastic cases.

While some speculation had indicated there would be no home button, the front glass on this iPad 3 still has a button. The blog also suggests that the iPad 3 will be a bit thicker than the iPad 2, but there are tapered edges in place that will help make it feel like it isn’t thicker.

M.I.C. Gadget also claims, along with 9to5Mac, that Apple will be releasing 16GB, 32GB, and 64GB models of the iPad, just like other releases. This would contradict an earlier report by Digitimes that there would only be 16GB and 32GB models. The blog also indicated that the pricing will stay the same:

“Readers will also be pleased to know that the price has not increased either,” Steve Lo at M.I.C. Gadget wrote. “We at M.I.C. feel that this is because the rumored LTE will not be integrated. As indicated in our previous in-depth article to Apple’s mobile strategy, we said there was a very limited market for LTE at this time. Also, the LTE chipset adds an extra cost to each unit, which the normal Qualcomm 3G chipset does not incur. We also feel that it will most likely be added to the next model, as opposed to this one. Our sources concur with us on this as well.”

Watch the full M.I.C. hands-on video with iPad 3 parts below: