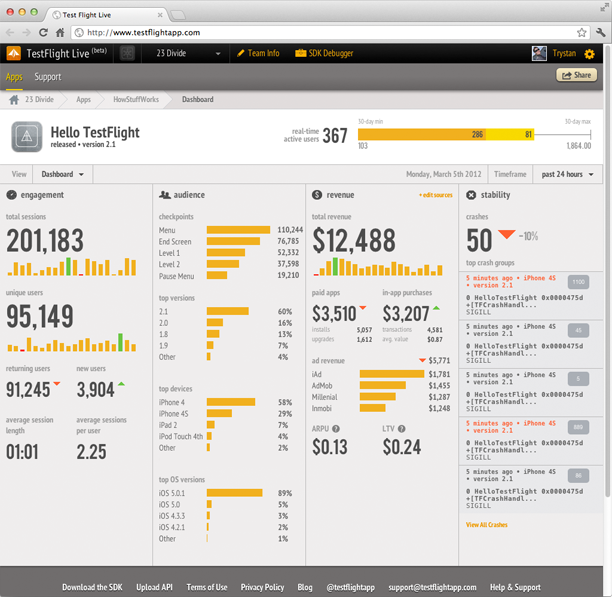 Burstly, a startup focused on helping mobile developers monetize through advertising, has acquired TestFlight, the most popular service for beta-testing iOS apps. Today it’s showing off the fruits of their joint labor, TestFlight live, an analytics dashboard for app developers that shows real time detail on an app’s audience, business and performance.

Pairing these two services together makes a lot of sense. TestFlight has become the standard for beta-testing iOS apps. But TestFlight has and will continue to be free. Burstly, on the other hand, can help apps make real money. So TestFlight acts as a funnel, delivering potential new customers to Burstly, which can provide the revenue to pay the bills. 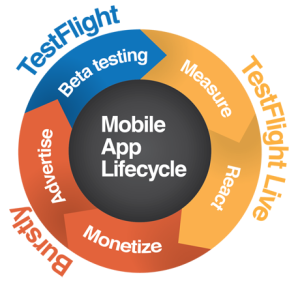 In today’s announcement TestFlight revealed that “We now have over 70,000 developers sharing more than 130,000 apps with a group of 280,000 testers! And while the widespread adoption of our product has been humbling, we know we need to invest more in features and performance to meet the needs of our expanding client base. This is where the investment dollars and scaling guidance from Burstly will be invaluable.”

Testflight said that they will be rolling out some paid services in the future, but will be relying on Burstly’s resources for the time being. The same code that worked for TestFlight works for TestFlight Live, so there is little extra work on the developer’s end. “Simply insert one line of code into your production app or leave the SDK you have been using for beta testing.”

The terms of the deal were not disclosed, but Burstly has raised $7.3 million to date. But it seems like this match was a long time in the making. From the Burstly blog, “We have known the TestFlight team for almost three years. They were one of the very first developers to integrate the Burstly SDK. In fact, our original launch video highlights our relationship with someone named Ben; the same Ben who is TestFlight’s co-founder (skip to 1:00).”