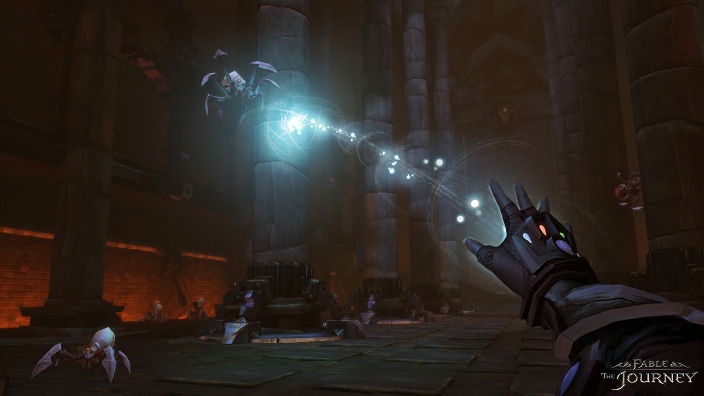 “The problem with storing your iPad in your underpants is the lovely buttock-crease imprint on the screen, and you’ll have to remember to take it out, because I did sit on it once.”

This intimate storage method is a particularly strange habit of famed game designer Peter Molyneux’s, especially considering the ironic effect of keeping his pricey tablet against his bare ass: “People strangely don’t want to share mine,” he half-jokingly tells me.

Particularly strange because the Brit loves the concept of people touching things…at least in his gaming projects. While talking to the press about his last game, Fable III, he used to describe how he wanted his virtual characters to connect via physical contact — and he wanted the players to feel this bond, too.

He’s taking this philosophy to the next level with 2012’s Fable: The Journey, an action/role-playing game that uses the Xbox 360’s motion-sensing Kinect to, well, connect the player to the world in his television set. Whether it’s petting (or comforting or healing or whipping) your best-pal horse or casting magic with gentle to “I’m going to blow you the hell up!” movements, Molyneux wants you to feel his game in a way you’ve never experienced before.

Why the obsession with touch? And what exactly does he have planned for the Kinect that may change the way future developers use the platform? We carefully sat down for an interview with Molyneux during the recent Xbox Spring Showcase 2012 (check out our other news and previews) to find out more.

GamesBeat: What is your deal with wanting to make sure that the gamer is always attached to something in your games? You went over that with Fable III. You wanted the touch… 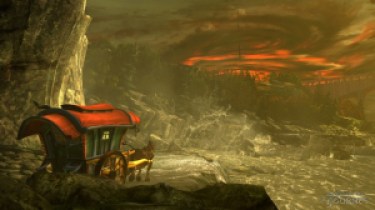 I think for me it’s more about what Kinect enables for me as a gamer. I hope other people, as gamers, can find out what it’s like to discover game mechanics in the game. We’ve lost that feeling.

With gaming, you used to just mess around and try things out and experiment, and wonderful things would happen. That still happens in games like Minecraft for sure, but why shouldn’t we approach that with a device like Kinect and say to ourselves, “Well, hang on a second. If Fable: The Journey never tells you how to do something, if part of the experience and the joy is discovering how to use your body, just maybe that will feel far more enjoyable than me giving you loads of tutorials.” And that’s what is wonderful about Kinect. The rules haven’t been set.

The trouble with controllers, you know, is all the rules are now carved in stone. You never pick up games anymore that use the controller in a different way. They all use it in exactly, precisely the same way. Your thumb is on the thumb stick, your finger is on the trigger, you pull the trigger, and a gun shoots or a sword swings or a spell is cast. That’s it. There’s no invention; there’s no inventiveness anymore at all.

I love, I adore, that Kinect is new. I adore the fact that people don’t understand how to control the games. I think that’s going to feel fantastic. And when you’re in The Journey, and we give you magic, we just say, “You’ve got magic.” We don’t tell you, “Raise your hand.” We just let you solve the problem. Then you discover exactly what it feels like.

Sometimes I want to throw spells like this [aggressive throwing motion], because I’m pissed off. Other times I want to be gentle. I want to be subtle. But I let you make up your mind as far as how you approach that, rather than those hard and fast rules on controllers. Does that make sense? 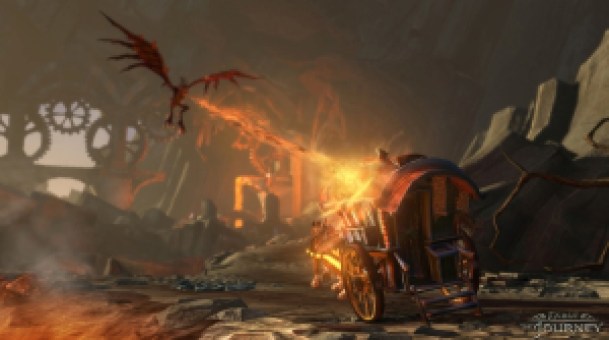 GamesBeat: That makes sense. When did that kind of light bulb turn on for you as far as wanting players to put actual emotion into their movements for the Kinect?

PM: Everything that you do is very analog with the Kinect. It’s not digital at all; it’s not on/off. You’re not pressing a button — it’s the speed of your arm, how much force you’re putting behind it. When you start doing that, you wonder, “Why am I pushing my arm out so much?” And you think, “I must be facing someone that I really, really want to kill.”

And it was rubbish. It was absolute rubbish because what Kinect allows you to do is to be far, far more analog than that, and we realized that if I get you to put in as much effort as the horse is, to really sprint, then it actually feels like you’re far more emotionally connected with the horse. And that’s wonderful.

So now it’s all about — we actually wrote this [in our design documents] — you talk to your horse through those reins. You can make him laugh; you can tickle him with the reins. It doesn’t really have an effect on the game, but it is an emotional link between what you’re doing with your body and what happens on screen. And if we get that right, it really is glorious.