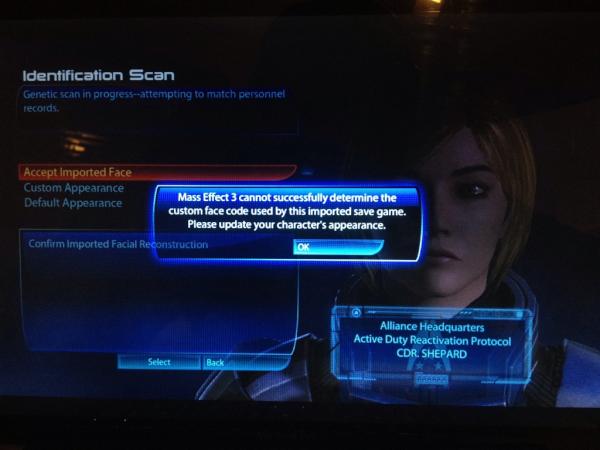 Update (3/9/12): BioWare Community Coordinator Chris Priestly has acknowledged the face-code error in a post on the game’s official forum. In that thread, Priestly wrote that the development team is correcting the issue. In the meantime, he provided a link to a user-created tool that may solve the problem for PC players. Keep in mind that this is not the official fix, so BioWare won’t take any responsibility if it turns your lovely female Shepard into a repulsive abomination unfit for human or alien eyes. GamesBeat has contacted EA and BioWare to get a time frame on the fix’s release. We will update again once we have their response.

Many gamers are reporting that Mass Effect 3 won’t import the Commander Shepard face data that they created in the previous games. The latest entry in BioWare’s science-fiction trilogy only just hit store shelves (or Origin servers, as the case may be), and fans are already taking to Twitter and the official forums to complain about their difficulties.

EA’s help page currently warns Xbox 360 users that importing from Microsoft’s cloud storage will result in failure. Many of the people having the face-code issue, however, claim they have never saved their game in the cloud, and a lot are playing on PC (which isn’t affected by the cloud-save error).

When fan Ian Chamberlin attempted a save-data transfer on his Origin Digital Deluxe edition of Mass Effect 3, he was met with this error: “Mass Effect 3 cannot successfully determine the custom face code used by this imported save game. Please update your character’s appearance.”

Xbox 360 user Jon Welles tweeted to the official Mass Effect account, “Wow, just got Mass Effect 3 for Xbox, and it won’t import the face of my Shep. No, it was never in the cloud. Please help!”

These aren’t the only two having this problem. The error seems to affect all players who customized their Commander Shepard in the first Mass Effect and then carried that same face through Mass Effect 2.

We’ve contacted BioWare for an official statement and are awaiting their response, which probably won’t come until tomorrow sometime.

For a series that the developer always knew would be a trilogy, it seems like a significant oversight that the protagonist’s face doesn’t work in some situations. The players who took the time to create their unique Shepards in Mass Effect 1 have been invested in this same facade over hours and hours of gameplay. Now, all they can do is hope to manipulate the character creator to approximate the Shep they had before or move on and accept a new face.

“Been playing since Mass Effect 1, so it’s a letdown,” Jon Welles told GamesBeat over Twitter. “It’s just a game, but it’s still a pain not getting what you pay for.”

If you are having troubles, or if you have a Mass Effect 1 save that worked flawlessly with the new game, please tell us all about it in the comments.